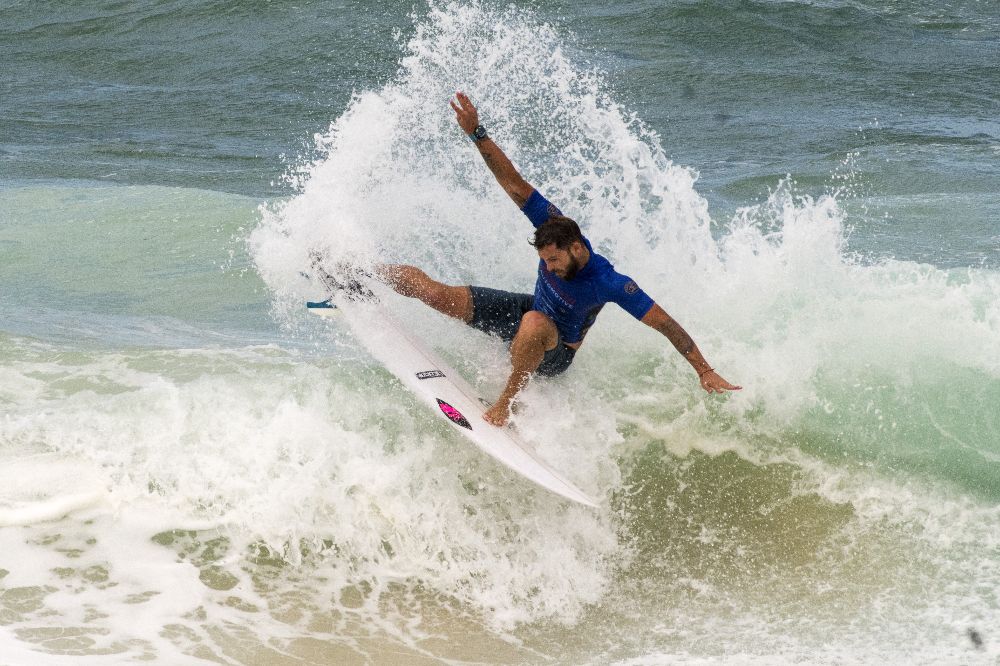 2015 Burton Automotive Pro champion Alejo Muniz (BRA) looked to be in event winning form again at Merewether beach, comfortably taking out Heat 1 of Round Four in the onshore afternoon conditions. Combining solid scores of 7.17 and 6.76, former Championship Tour (CT) competitor Muniz is looking to add another big result at Surfest, including a runner-up finish in 2013, to begin his 2018 QS campaign strongly.

“The heat went really well – there are waves out there, they are just really hard to find,” the Brazilian said, comparing the less-than-ideal conditions to the year he finished second. “Newcastle has been really good for my rankings all of my career – to get a good result here would put me in a good position for requalification. It fits really well with the way I surf, and all the Brazilians – Willian (Cardoso, 2012 Champion) and Filipe (Toledo, runner-up in 2012) and all the boys do well because it looks so much like home.”

2018 Championship Tour Rookie, Michael Rodrigues (BRA), posted the highest heat total of the event so far, an 18.07 (out of a possible 20), continuing the dominance of Brazilian surfers throughout the Round. Using the less-than-ideal conditions to his advantage, Rodrigues’ fast surfing style tore waves to pieces, placing both his competitors into a combination situation (needing two scores) for the final 15 minutes. Rodrigues progressed to the man-on-man heats in Round Five and said he is full of confidence heading into his maiden year on tour. “I feel so good, it’s amazing to compete in waves that I like,“ Rodrigues said.

“Australia for me is like second home, I’ve been here before and I feel super comfortable. It’s a dream come true this year, I’m so excited and confident – I just want to keep surfing out there.”

North Stradbroke Island’s Ethan Ewing (AUS) left his run late into Heat 3 of Round Four, the former Surfest Pro Junior Champion in 2016 racking up two 6.00-point rides to overtake Beyrick De Vries (ZAF) and Marco Fernandez (BRA), and consolidate first position. After dropping off the ‘CT in 2017, Ewing is focused to push his requalification campaign, hoping to bag big points in the first QS6,000 of the year. “I had a pretty bad year last year, so it feels good to have a couple of heat wins today,” Ewing said.

“Last year I learnt a lot, I’m back on the QS now, but I take confidence from the past and I’m keen to get back on (the CT). You can be a bit more selective when it’s only one other guy, I’m looking forward to surfing some man-on-man heats, it’s like the contest re-starts and you get a good crack.”

One of the opening heats of Day 5 saw CT superstar Sally Fitzgibbons (AUS) face off against Brisa Hennessy (HAW), the young Hawaiian that beat her on Maui last year and dashed her hopes of a maiden World Title. Although the Grandstand Sports Clinic Women’s Pro plays as a warm-up for Fitzgibbons, this heat provided an opportunity for the current world No. 3 to get one back on 18-year-old Hennessey. The two traded blows until the dying seconds and it almost looked to go Brissa’s way but it wasn’t so and Fitzgibbons survives to battle it out in Round Four.

“It was quite ironic to have Brisa in my first heat of 2018 and my last heat of 2017,” Fitzgibbons said. “I obviously know what she is capable of and when I saw her take off at the end, I knew I’d need to look for a score. If she ended up getting it would have been a shame but in the end I was able to progress, which is great. There are a few good ones out there that Alyssa (Spencer) found so I’ll be looking for them in my next heat.”

While Sally Fitzgibbons and Brisa Hennessy battled it out for the second progressing spot, Californian prodigy Alyssa Spencer (USA) dominated the heat. The stylish goofy-footer was excited and nervous to surf against one of her heroes in Fitzgibbons but it didn’t show as she easily won with a two-wave total of 15.53.

“Coming up against Brisa and Sally was really cool because I’ve always looked up to them,” Spencer said. “It was really cool to be out in the water with them and even more special to snag the win – I’m really stoked. This year is all about gaining experience for me and heats like that is what it’s all about.”

On a day that saw multiple major upsets, many past and present CT competitors fell to lower seeds in the draw. Heat One of Round 4 saw World No. 5 Matt Wilkinson (AUS) eliminated by less than half a point, before former CT surfer Leonardo Fioravanti (ITA) suffered a similar fate in a tight Heat Five. The World No. 14, Connor O’Leary (AUS), and No. 15, Portugal’s Frederico Morais, fell in successive heats before 2018 CT Rookie Griffin Colapinto (USA) failed to back up 8.77-point-ride with a strong backup score, eliminated in Heat Nine. Experienced CT competitor and in-form surfer of the event, Matt Banting (AUS), couldn’t get past Round Four in one of the most exciting heats of the day, even with a heat total of 13.90. Local favourite and former CT star Ryan Callinan failed to find his feet and bows out of his hometown comp.