Australians Strike Back at Newcastle Surfest 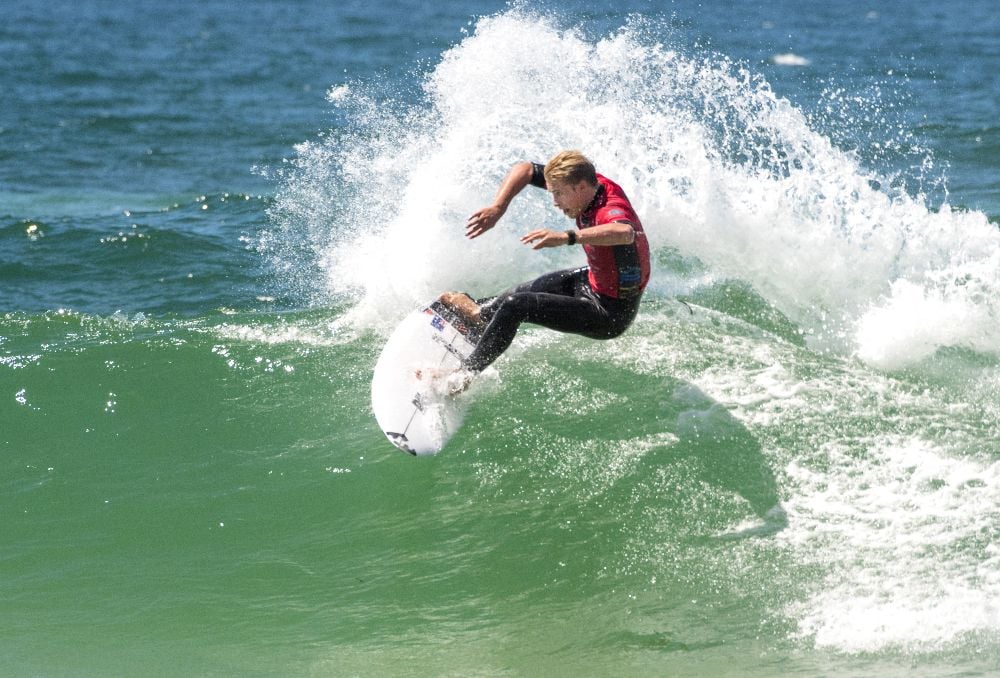 Merewether, NSW/AUS (Saturday, February 24, 2018) – The stage has been set for a massive final day at the Burton Automotive Pro and Grandstand Sports Clinic Women’s Pro at Merewether in Newcastle. The World Surf League (WSL) Qualifying Series (QS) 6,000 events have seen another awesome day of action as the world’s best surfers ripped into wind affected 2-foot peaks. The local contingent stamped their authority on Surfest 2018 today, taking up 50 percent of the spots in both the Men’s and Women’s quarter finals.

Ethan Ewing (AUS) only rode two waves in heat three of Round five, though still managed to take it out in impressive fashion. Locking in an 8.00-point ride for four huge inside turns on the right-hand reform, Ewing backed his excellent score with a 6.23 before waiting out the remaining 10 minutes of the heat out with priority. A former CT competitor, Ewing looked assured in his surfing in abating mid-tide conditions.

“In man-on-man heats, you can be more selective, and my plan was to get two good scores and then hold priority,” Ewing said of his successful heat strategy. “It was really slow out there with the tide filling in, so I was a little bit lucky to get that quick start and a good score. I would rather it be a bit bigger where I feel confident, so it will be good to see what tomorrow brings.”

Another ex-CT surfer, Lennox Head’s Stuart Kennedy (AUS), kept busy in the following heat by utilising a separate section of the bank to his opponent Beyrick De Vries (ZAF) – paying off with a winning heat score of 14.17. Surfing fast and loose on new epoxy equipment, Kennedy is after a strong result at Merewether, the first QS 6,000 of the year, to gain momentum in a push for CT re-qualification.

“I’ve been watching a lot of this event and I went out there and tried to execute what’s been scoring well,” Kennedy said. “Beyrick was sitting way off that bank where I was and I just wanted to get myself on the best ones. I’m riding a different board to what I’ve been on the last few days, it’s a little bit more flexy so when I got that one (8.00 point ride), I just surfed it to how I wanted, and getting the link-up from out the back I didn’t do anything too crazy, but obviously the judges liked it.”

A strong Brazilian showing in Newcastle saw a showdown between experienced competitor, and former CT surfer, Jadson Andre (BRA) and 2018 CT Rookie and fellow countryman Tomas Hermes (BRA). Experience on the big stage proved valuable as Andre took out heat five by a slim 0.27 to book his place in the quarter finals.

“I’m very stoked that we have many Brazilians on tour this year – I will be rooting for them and I know they will be rooting for me,” Andre said after falling off the CT in 2017. “This is the first very important qualifying event of the year, I travel all the way here from Brazil for these events so I am here to do well. I want to compete at a lot of contests this year, my biggest goal in 2018 is to win a contest and it would be good to do it early in the year for sure.”

In the much-anticipated ‘heat of the day’ between contest standouts Culburra’s Mikey Wright (AUS), and World No. 18 Kanoa Igarashi (JPN), the crowd of Newcastle surf fans was treated to a first-class show from two of the world’s hottest young prospects. Although Igarashi had the higher 8.00-point-range score, in the end it was Wright who backed his up with a 6.83, rewarded for his aggressive and powerful surfing.

“I just went out there and took it as any other heat,” Wright said, talking down the anticipation of his showing. “I just take it as I am surfing by myself, no matter who I am against. I’m definitely excited for more swell tomorrow, but even today it was a bit tricky and I managed to find a couple. No matter what it’s like or who I am against I just do my own thing and take it as it comes.”

Inspired by her brother Mikey’s quarter final berth, Current Women’s World Champion Tyler Wright (AUS) continued her march towards the final day with a dominant win over fellow CT competitor Keely Andrew. Wright will head into final’s day with the chance to making history with her brother Mikey as the first sibling winners at the Newcastle Surfest QS6,000 event.

“Owen, myself and my older sister Kirby were all in a final at a Pro junior but I haven’t had that experience at this level of event,” Wright said. “It’s sick to see Mikey into the Finals and cool to be there with him. It really shows all of the hard work he has put in to get to this level and it is cool as a sister to see him succeed. He always looks out for me and pushes me so I feel like it will be good for each of us going into the Final day. I’m slowly building up and getting into the swing of things and I’m excited for a big final day here in Newcastle.”

Fresh off a win at the Vissla Great Lakes Pro QS1,000 last week is Holly Wawn (AUS) from Sydney’s Northern Beaches. Wawn had the tough task of taking on 2018 Women’s CT Rookie Caroline Marks for a spot in the quarter finals. The heat was a thriller with Wawn clinching the lead with only minutes left only to nearly lose it after the buzzer with Marks finding a set in the dying seconds. Needing a mid-range score Marks went to town only to fall on the last manoeuvre and come short of the requirement, leaving Wawn to take the heat.

“That wave that she got at the end was the best wave of the heat for sure,” Wawn said. “I saw her do a couple of turns and was really disappointed thinking I had lost and I was just watching my great start to the year get crushed in front of me. A fFinals finish here really sets you up for the season so I’m happy to have made it.”