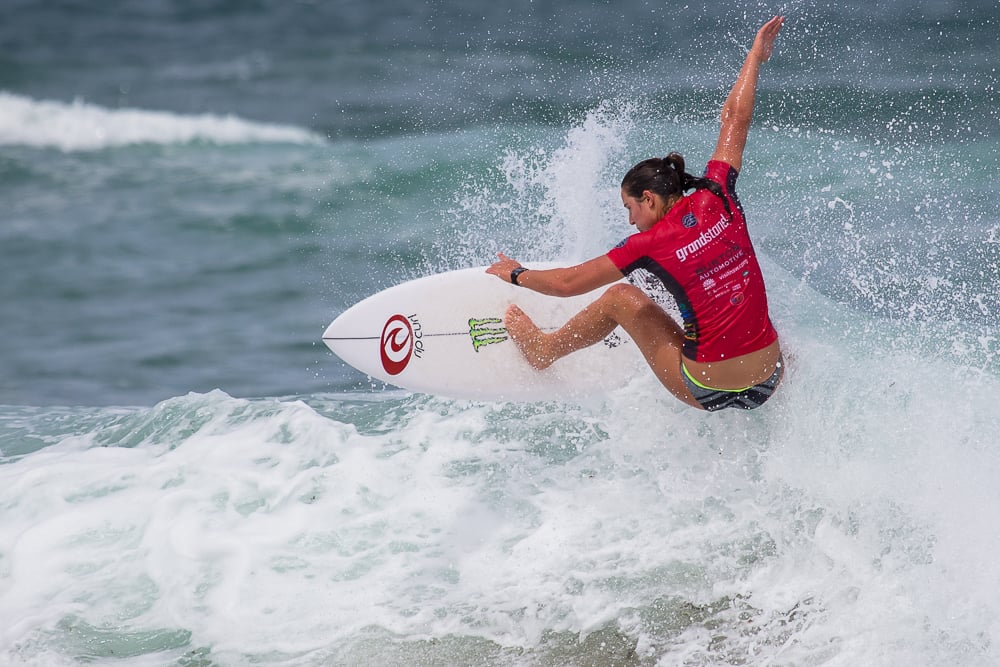 Reigning two-time World Champion Tyler Wright (AUS) translated her 2017 title-winning form into a commanding victory in the first heat of Round 3. After a win with Culburra Boardriders Club at the nudie Australian Boardriders Battle last weekend, Wright surfed with her trademark powerful style, attacking the punchy right-hand waves at Merewether beach. Shrugging off any injury concerns from late last season, Wright’s intentions of a third-straight World Title in 2018 were clear in her dominant performance.

“It feels really good to paddle out in a normal heat for the first time this year,” Wright said. “I’m feeling really fit and healthy at the moment and any sort of injury is a thing of the past. I haven’t surfed at this event since I was a kid so it’s so cool to be back — I always enjoy Newcastle. I’m really pumped for 2018 and can’t wait to see what the season brings.”

Championship Tour Rookie, Floridian Caroline Marks (USA), continued her strong start to her 2018 campaign, posting an 11.67 to progress to Round 4. The youngest ever qualifier for the CT, Marks’ momentum continues from her triumph in the first Women’s QS6,000 event of the year, the Ron Jon Florida Pro in Sebastian Inlet, Florida. Backing up her 5.60-point ride with a 6.07 late in the heat, Marks said a good result in Newcastle will take the pressure off her heading into the first CT event, the Roxy Pro Gold Coast.

“I was really excited to surf a heat today after three lay days, I just had to get out there and give it my best,” Marks said. “I am feeling super confident right now, I have a lot of momentum and my boards are feeling great and I think it’s showing in my surfing. It’s cool to have events like here and in Florida. After getting a result there I have so much less pressure on myself for the year – I love surfing and love competing so I’m going to put my energy into the CT and the QS and just see how I go.”

Sunshine Coast surfer Keely Andrews (AUS) had a slow start to her first 2018 Surfest heat, riding two less than 1-point rides before posting a heat-high single-wave score of 7.93. Ranked 11th on the 2017 CT, Andrews said she felt at home in the less than ideal conditions, which she said were comparable to her home break.

“I feel super comfortable in the onshore stuff, that’s all we get at home usually so I had fun,” Andrews said, coming off a quarter-final finish in the Ron Jon Florida Pro last month. “It’d mean a lot to win, to take that confidence into the start of the year at Snapper, where I’ll probably ride the same board. To collect a few points along the way would be quite handy – I can’t wait to surf the rest of the event.”

Powerful Hawaiian surfer Tatiana Weston-Webb (HAW) looked comfortable in her Round 3 heat, progressing into Round 4 with a total of 11.27. With a quarter-final berth in the 2016 Surfest event, the 2017 world no. 10 Weston-Webb’s power-based surfing style tore through the afternoon onshore conditions.

“I wanted to be solid on my feet because it’s been really bumpy out there. I knew I needed have strong legs and lay into my turns, and I did that so I’m super stoked,” Weston-Webb said. “It was a really frantic heat, but the surf here is always really strong which is similar to home. I’ve been here before a few times and I love coming here so I hope I can be comfortable and get a good result.”