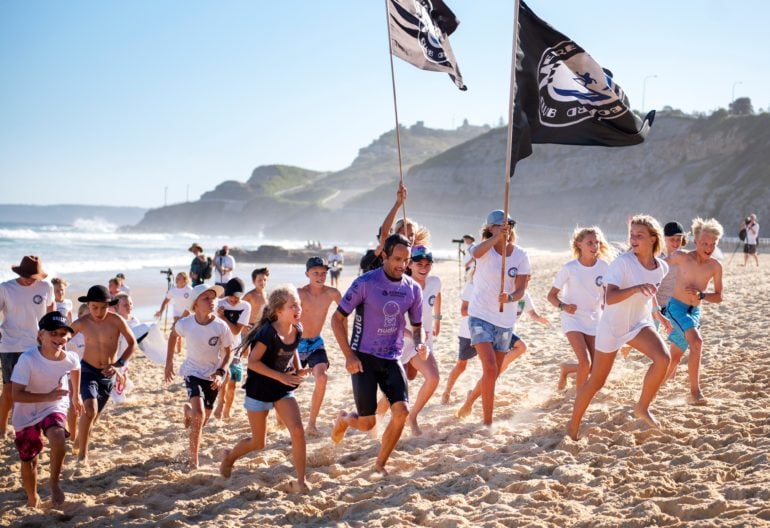 Newcastle, NSW / AUS (Sunday, February 17, 2019) – The Merewether Surfboard Club has taken out the nudie Australian Boardriders Battle National Final in front of a huge home crowd at Newcastle Beach. A massive field of 70 clubs was whittled down to 24 for the final weekend, which saw Merewether eventually claim it’s first national title in fun 2-to-4 foot waves.

In the final team heat of the day, Merewether came up against former two-time champs Snapper Rocks Surfriders, an inform North Shelly Boardriders and event dark horse North Shore Boardriders. After falling just short of the win at last year’s event and losing two of their top surfers to injury this year, Merewether came into the event with relaxed expectations. The shift in attitude seemed to help them as Jesse Adam, Mike Clayton-Brown, Philippa Anderson, Mitchell Ross and Morgan Cibilic brought home their clubs first ABB title.

“This is the best day ever,” said Merewether Surfboard Club President Jesse Adam. “All of the team members are such legends I can’t believe how proud I am of them all. We had two of our guys pull out of the team with injuries so we had a different line-up to normal and came in with low expectations. After coming so close a few times and feeling the heartbreak of just missing the win, this has made it all worth it – and to do it at home is so sick.”

Merewether’s Philippa Anderson was a standout all event, posting solid scores to help her team to the Final. Fresh off a win at the first QS1,000 of the year, Anderson hopes this experience will spur on her to more success in 2019.

“This has been such a cool weekend,” Anderson said. “I had a lot of my friends here on the beach so the support was so awesome. Merewether has such a deep pool of talented surfers so replacing Ryan (Callinan) and Jackson (Baker) was never going to be an issue. I don’t think there is as much pressure at any other surfing event so winning is definitely a good learning curve for me. I hope this event comes back to Newcastle every year – it’s so fun.”

2019 Women’s Championship Tour Rookie Macy Callaghan made nudie Boardriders Battle Final history, representing her club North Shelly Boardriders as the team ‘Power Surfer,’ the first time this has been done by a female. Callaghan did her team proud putting on strong performances every time she hit the water and was thrilled with how her team had another ABB final finish.

“When it was suggested that I surf as the Power Surfer I was a bit hesitant, but everyone in the club supported the decision and had faith it would work,” Callaghan said. “There’s definitely a lot of pressure to perform when surfing for your club, but the guys from North Shelly all gave me their support.”

The twenty-four qualified clubs were: