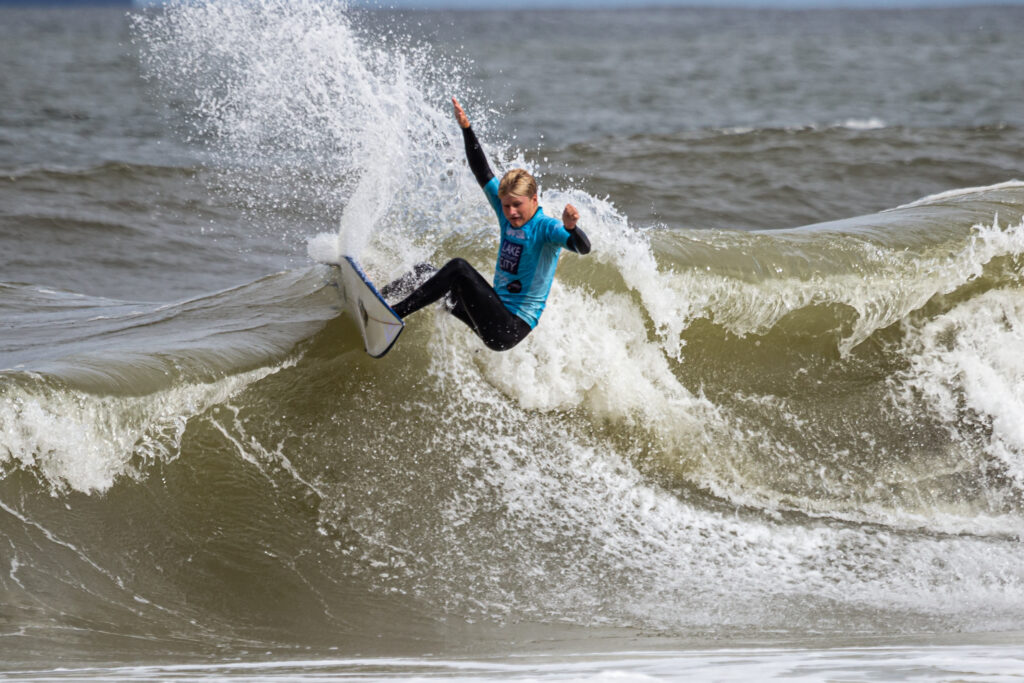 The Harrisons – no relation – took out their respective events from a field of more than 100 outstanding young athletes from around the nation.

Year 12 student Marlon Harrison showed just how important wave selection was at Redhead beach in the business end of the competition. He caught just two waves in both the semi-final and final, showing a maturity in both patience and judgement.

Marlon, who surfs for the Snapper Rocks Surfriders club, is currently ranked fifth on the World Qualifying Series rankings in Australia/Oceania. And he now leads the Men’s Junior tour rankings after today’s win.

Today he waited until the last minute of the final to secure that heat’s best score.

“I normally catch a lot of waves. I’ve never had a heat where I only caught two waves and it wasn’t a planned strategy to wait.  But while I’ve been here at Redhead I’ve been relaxed and calm and knew I only need the two best waves.

“The rights were a bit like Snapper today, it was bowly and fast,” he said.

And he’ll be back in Newcastle to contest the Men’s WQS 5000 City of Newcastle Pro which is slotted for Merewether beach from 29 March.

An excited Ellie Harrison thought she’d blown her chance at victory when she found herself overly excited in the final. The 16-year-old, who now sits atop the Women’s Junior rankings and second in the World Qualifying Series rankings in Australia/Oceania, said she thought she caught too many bad ones.

“I thought I might have been too nervous and blown the final. I was way too excited and very frothing. I wanted to go every wave,” the Torquay Boardriders Club member said.

“I’m happy with my performance and want to surf in the Newcastle QS. My goal is to do well on the QS and make it to the top 7 to get into the Challenger Series,” Ellie said.