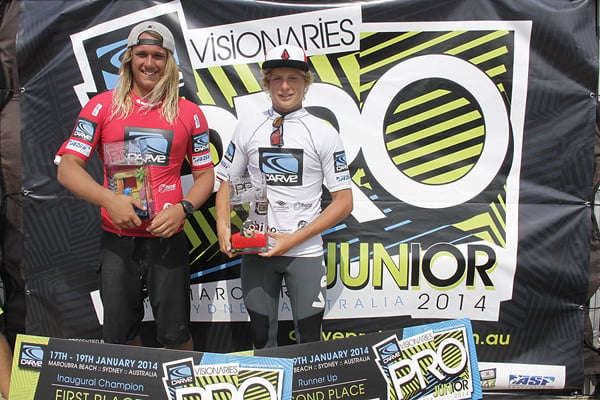 Both surfers engaged in a fierce dog-eat-dog battle throughout the final. After locking in a series of impressive scores, Norris was victorious by a 1.67 point margin. Norris has moved into the number one position on the ASP Australasian Pro Junior Series rankings.

“This is just an incredible feeling,” said Norris. “The waves were really tough out there and Jackson (Giles) is such a good competitor so it could have gone either way. Fortunately, I got one good wave and Jackson was too deep. He’s such a good surfer and I knew he had the home town crowd behind him as well. I began to stress out in the final ten minutes of the heat after I took the lead and just hoped he didn’t get a wave.”

Despite holding a home-court advantage, Jackson Giles was unable to steal the win when Norris locked in an impressive 7.27 wave score (out of a possible 10 points), but the impressive Giles was still ecstatic with a second place finish.

“I wasn’t expecting too much out of this event, so I’m pretty stoked to have made the final,” said Giles. “I wanted to get a quick score on the board, but it didn’t really happen and I made a priority error and let him have one bomb-set which gave him the score to move into the lead. I’m going to take the confidence out of this and hopefully keep this momentum going into the next few events.”

Kelly Norris comes into the Hunter Business Boardriders Pro Jnr on the 14th Febraury at Merewether Beach the 18th seed while Jackson Jones is the 34th seed.

Get live results at www.surfest.com throughout the event.