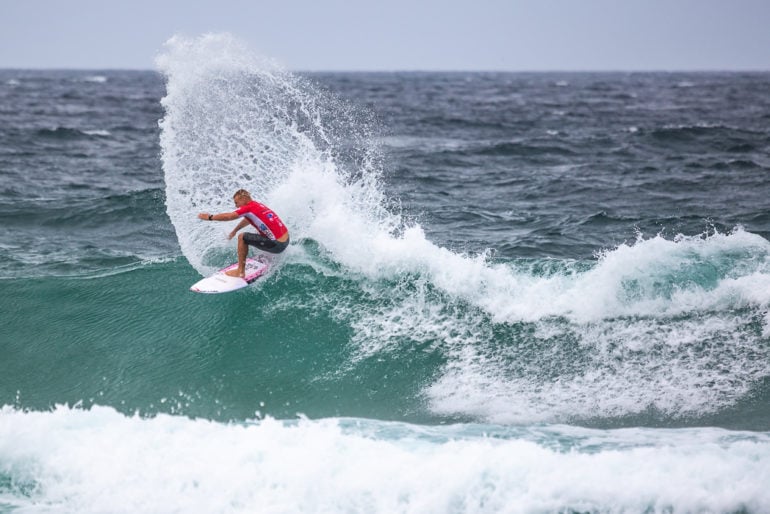 Merewether, NSW /AUS (Thursday, March 14, 2019) – Day 4 of competition at Newcastle Surfest’s Burton Automotive Pro QS6,000 has seen some of surfing’s biggest names dip out of contention as a pack of hungry Qualifying Series competitors put their case forward for the 2019 season. Merewether saw deteriorating 2-to-3 foot bumpy waves with cross-shore winds playing as the perfect enhancer for some of the best aerial surfers on the planet.

Heat 1 of Round 3 saw World No. 2 Julian Wilson (AUS) came up against former CT competitors Caio Ibelli (BRA) and Stuart Kennedy (AUS) along with West Australian prodigy Jack Robinson (AUS) in what was one of the most firey and exciting matchups of the event so far. Top seed Wilson, the favourite to take out the event, struggled to find a rhythm in the blustery peaky conditions only posting a 10.03 two-wave combination, slightly ahead of Kennedy. Ibelli held a decent lead until youngster Jack Robinson, began to find confidence in the air, boosting off every section that came at him to post the highest heat total of the event so far, 16.30 to take the win. Known for his prowess in waves of consequence, today’s win in scrappy peaks could be the confidence boost Jack Robinson needs for a major assault on the QS in 2019.

“I’m trying really hard to focus on the waves that are on offer at these QS events,” Robinson said. “And the reality is a lot of these QS events are held in small, hard conditions like this so you’ve got to be prepared to grind out heats. I think If I can string together some results at QS events like this and be in a good position by the time I get to Hawaii I’d have a really good shot at qualifying. I’ve always known that I can surf like that in small waves so I’m glad I can pull it all together when I came up against the World No. 2 — I’m super pumped on that win.”

2019 CT Rookie Deivid Silva (BRA) was looking for redemption at Surfest after he went down early at the recent QS6,000 in Brazil. Silva is hoping for some solid results at Surfest and in Manly so he can go into his maiden CT event at the Quiksilver Pro Gold coast with less weight on his shoulders. Today the young Brazilian goofy-foot took a step in the right direction taking out his Round 3 heat and progressing with local hopeful Jackson Baker (AUS).

“A lot of the CT guys are here to warm up and get some heat practice in but I am here for a big result,” Silva said. “If I can get myself in a good position on the QS rankings and have less stress heading to the Gold Coast that would be a huge bonus. I always love getting my season started in Australia and I’m so happy that I’ll get to hang around and surf Snapper and Bells after this, It is my dreams coming true for sure.”

A runner-up finish at the Burton Automotive Pro in 2016 set Italian superstar Leonardo Fioravanti (ITL) on his way to qualifying for the Championship Tour where he only spent one frustrating season. In 2019, Fioravanti is back in Newcastle and back on the Dream Tour and already, he is out doing his CT contemporaries, surviving a day where most of them were sent packing.

“I have such great memories of competing in Newcastle so it’s great to be back,” Fioravanti said. “It has been pretty crazy to see a lot of the top seeds drop out but it doesn’t mean to much because there are so many amazing surfers on the QS and anyone in the event could win it. It is, however, comforting to know that names like Julian Wilson and Owen Wright won’t pop up in your heat but I do believe the level of surfing on the QS is almost level with the CT, it’s just the waves that differ.”

Event directors will return to Merewether Beach tomorrow where competition is likely to resume at 7:00 AM AEDT.