Julian Wilson Leads The Pack On Day 3 Of Newcastle Surfest 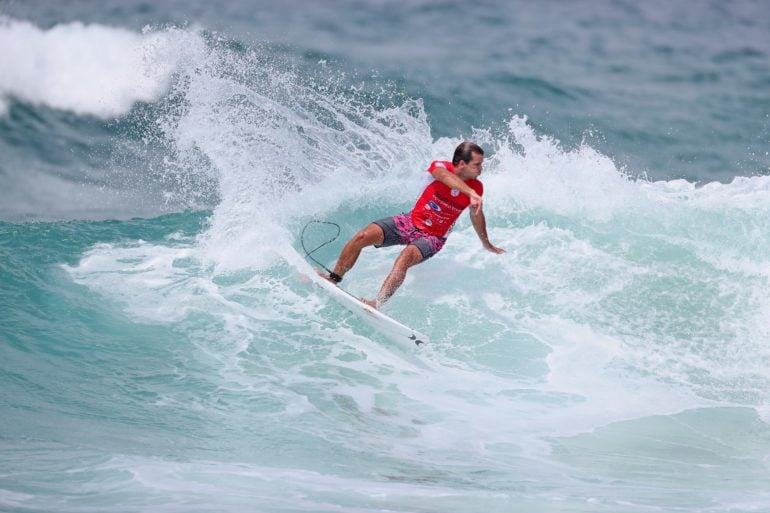 IMAGE: Current World No.2 Julian Wilson was a standout on Day 3 of the Burton Automotive WSL QS6,000 as part of Newcastle Surfest. PIC: Gary Luke Photographics

Merewether, NSW /AUS (Wednesday, March 13, 2019) – After a few testing days of small waves at Dixon Park, 2019 Newcastle Surfest has moved back to its primary location at Merewether as a southerly change whipped up 3-to-4 foot waves overnight. Although the surf was wind effected, competitors at the Burton Automotive Pro and Holmes Civil Projects Pro put on an epic show as some of surfing’s biggest names took to the water.

After a nail-biting end to the 2019 World Title Race in which he narrowly finished runner-up, Julian Wilson (AUS) has had some time to reset over the offseason and has chosen the Burton Automotive Pro as the event to commence his competitive season. Wilson, who now resides in Newcastle, was relishing the fact he could surf a major event like this while sleeping in his own bed – A rarity for pro surfers. The Sunshine Coast native started the year the right way, taking out Heat 1 of Round 2 with his technically perfect rail work and admits that he is still just as motivated here at Surfest as he was competing for a Title at pumping Pipeline.

“It’s obviously different to Pipe but I still have the same motivating factors for sure,” Wilson said. “I love competing and having success in surfing events so there’s no difference there. Plus on the QS you can get tricky conditions which challenge you and it’s really competitive with four man heats and a lot of assertive competitors which is good. This is definitely the biggest event I get to be at home for which is fun. I’m not really that used to it, to be honest as I’ve only recently moved here. It’ great that we’ve got some waves for today as it’s been pretty marginal, so today was a nice change.”

Young Californian Kirra Pinkerton (USA) is having a massive 12 months of milestones, taking out her maiden WSL World Junior Championship in Taiwan last December then finishing runner-up at the Florida Pro QS3,000 in January. Pinkerton is hoping to continue this trend at the Holmes Civil Projects Pro where a big result could set her on her path to CT Qualification, which at the end of the day is her major goal. Kirra took a step in the right direction on Day 3 at Surfest, taking out her opening heat and overcoming fellow former WSL World Junior Champion Vahine Fierro (FRA) along the way.

“It was cool having a heat with Vahine (Fierro) as we’re both World Junior Champions but also daunting because knowing how hard it is to win that event I knew she’d be tough to surf against,” Pinkerton said. “I’ve had my best QS result already this year so I’m hoping to get some more solid results especially here at the first QS6,000 of the year. Getting into the Finals here could really set you up for qualification and that is my major goal this year so I’m stoked to get off to a good start.”

Local young-gun Jackson Baker (AUS) was not far off pulling out of his home event as he recovered from a high-grade ankle strain. Fortunately for Baker and his hometown of Newcastle, this wasn’t the case as they are hopeful that a male local will take the win for the first time in the events 34 year history. Baker isn’t to keen to think that far ahead but he certainly got his campaign off to a good start posting an excellent 9.17 (out of a possible 10) on his opening wave, demonstrating that he has recovered well from his injury.

“This is definitely my favourite event of the year,” Baker said, “The waves never come to the table but knowing everyone and having that comfort of being at home definitely helps. I surf Merewether like this more than any other spot. I wasn’t really organised coming into this year, I hadn’t really ordered any boards or been training because I’ve been dealing with this injury so I’m stoked to be able to be surfing here. I’m keeping my expectations really low but it feels good to get that first heat out of the way. Being a local there is the pressure of winning the event but I don’t think too much about it. I’d love to see Ryan win it or if I did I’d be over the moon.”

Former CT competitor Alessa Quizon (HAW) is taking a more relaxed approach in 2019 with low expectations on results and a positive attitude to travelling the world and surfing. This adjustment seemed to have a good effect on her results as she took out her opening round heat with a commanding performance at Merewether.

“I’m keeping my expectations low and just focussing more on having fun this year,” Quizon said. “Obviously a good result would be great but I think in the lead up to an event I want to stay a little more relaxed and also show support to my fiance’ (Caio Ibelli) who is also competing. That’s the plan for now and I’ll see if I reassess after competing here and at Manly next week.”

Former Championship Tour competitor and ‘Positive Vibe Warrior’ Tanner Gudauskas (USA) is another QS competitor opting for a more relaxed approach to competition in 2019, just taking the QS one event at a time. The laidback Californian also translated his positivity into results, taking a heat win in a hard-fought tussle with Ethan Ewing (AUS), Jordan Lawler (AUS) and Ramzi Boukhiam (MOR).

“Although the surf looks junky I was really excited to get out there,” Gudauskas said. “The waves have been pretty small at home for a while so I was super excited to get out there. When you got the right one they were pretty good, plus we’re in board shorts and in Australia so we’re having a good time. Newcastle is such an insane city with fun waves and good vibes, my brothers and I always have a good time here so I love kicking off the season here. I’m just focussing on this event and Manly at the moment then see what happens. Just have a good time and surf the Triple Crown in Hawaii at the end of the year I suppose.”

Event directors will return to Merewether Beach tomorrow where competition is likely to resume at 7:15 AM AEDT.
The 2019 Burton Automotive Pro and Holmes Civil Developments Pro QS6,000 events will run from March 11 – 17 and be broadcast live at www.worldsurfleague.com.