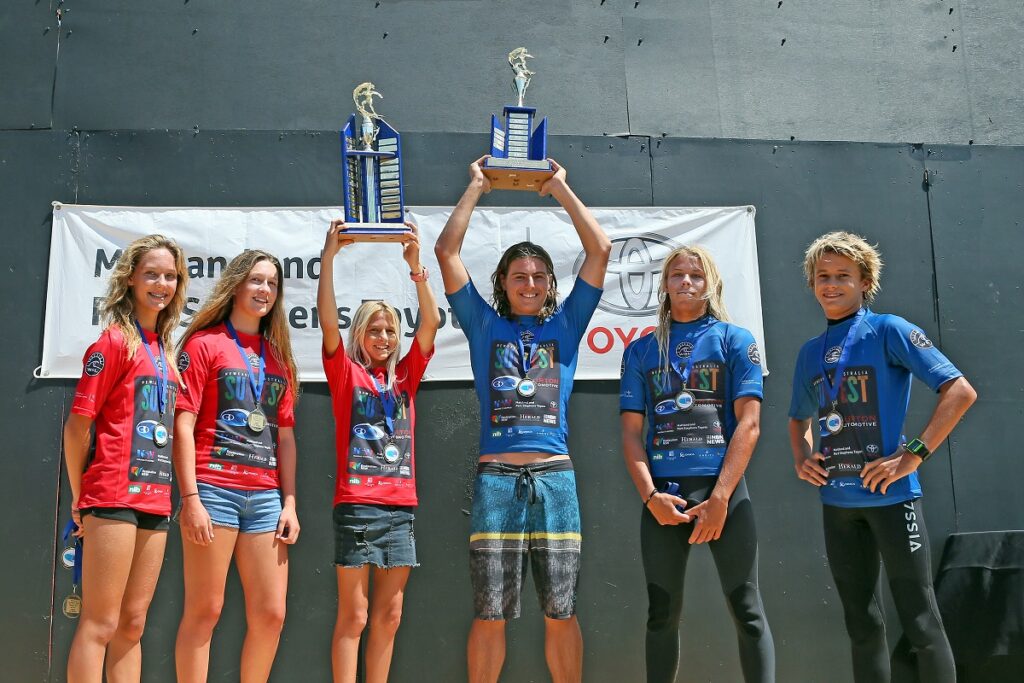 SIXTEEN high schools providing 40 teams found great waves over two days of competition at Nobbys and Merewether beaches in a battle for the trophies on offer at the Maitland and Port Stephens Toyota High School Teams Challenge.

And what a battle the boy’s final provided at Merewether beach, with the closest ever result in this unique teams event.

When the siren sounded, Illawarra had squeezed past Narrabeen Sports High A by one-tenth of a point, with less than two points separating first from fourth.

Sixteen-year-old Darcy Declouett, who was bumped in round two in last weekend’s Pro Junior at the same beach as today’s final, said it was a great day for the Illawarra boys.

“Getting the bonus points on offer means it’s so important to get a strong result from the first wave. This is our first victory as a team and the first victory for our school,” he said.

Darcy Declouett showing some of the stylish and powerful surfing that helped his team become the first from the Illawarra Sports High to claim the Maitland and Port Stephens Toyota High Schools Team Challenge at Surfest.

“We practised catching waves in under five minutes last week and the drill of this actual set up,” Darcy said.

Fellow team member Kyen Stuart from Thirroul, who finished tenth in the Cronulla Pro Junior and also surfed in last weekend’s Maitland and Port Stephens Toyota Pro Junior, said he would be concentrating on trying to get some good results in the remaining 2017 Pro Junior competitions.

Their surf coach Geoff Latimer, who is the surfing program coordinator and a maths teacher at Illawarra Sports High, said the work they have been putting in both the surf and the gym is paying rewards.

“This program started three years ago, We’re the sports high south of Sydney and this program is designed to really help the surfers on the south coast.

Illawarra Sports High’s Kyen Stuart stayed cool in today’s final and got the job done for his team.

“It’s about ensuring educational development as well as surfing development and joining those two passions together. I guess this is our breakthrough win for the program and it’s a great result for the boys,” Mr Latimer said.

“The south coast nursery is such a large talent pool and what you’ve seen with Owen Wright and Tyler Wright and Sally Fitzgibbons and Mick Lowe – that’s what we are trying to build on and it’s the variety of breaks in the area that gives our surfers such a grounding in variable conditions,” he added.

In the girl’s competition, the surfers from Tuggerah Lakes Secondary College (Tumbi Umbi Campus) did not lose a heat during the entire competition. The girls know each other’s strengths and surf together in the North Shelly Boardriders Club.

Molly Pickiun was pointed to by her fellow team members as having contributed a superb display of aggressive yet controlled surfing. Part of her team’s domination came from the ability to grab the bonus points in every heat.

“Every time we got our bonus points. Jasmine was always in early ensuring the six points which is really crucial,” Molly said.

She won’t have long to rest though – she’s heading to the Australian Open of Surfing at Manly in less than two weeks.

Molly Pickiun was a standout surfer in today’s girl’s final. The 14-year-old from Shelly Beach ran second in last weekend’s Sanbah Cadet Cup U/16 division and is clearly one to watch for the future.

Surf sport and visual arts teacher at Tuggerah Lakes Secondary College (Tumbi Umbi Campus) Anthony Chittick – who has been escorting high school teams to Surfest for around a decade – was very pleased with the efforts of the girls.

While the boys from Tuggerah Lakes have won a High Schools Team Challenge before, it was a new experience for the girls to raise the trophy on behalf of the school.

‘This is the first time the school has won with the girls and we are really looking forward to the next couple of years,” he said.

When asked what makes such a strong surfing ability from the area, Mr Chittick was quick to point to the variety of waves on offer and strong family connections and support.

“There’s plenty of beach breaks and point breaks. The families surf together, the dads surf and the mums are involved too. It’s a great surf culture,” he said.