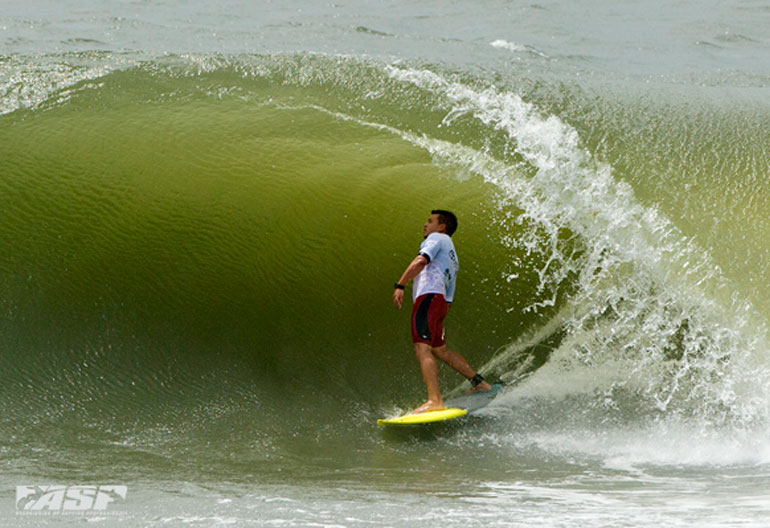 Newcastle Harbour, NSW/Australia (Saturday, February 23, 2013) – A bold move by Surfest Newcastle Australia organisers paid dividends as they relocated the event from the unsurfable 3m storm surf at Merewether to a semi protected location inside Newcastle Harbour.

They also created history as this was the first time ever in the world of Professional Surfing that a surf event ran in a harbour!

It may have been inside a harbour but it still delivered slabbing 2m (6 feet plus) right hand dangerous reef waves that offered sections for both excellent tube rides and on-face power moves, and the surfers revelled in the conditions.

Fitzgibbons was the day’s standout surfer posting two outstanding 9-point-plus- rides and the events  highest heat tally to date of 19.43 out of a possible 20.

For Dimity Stoyle this is a massive performance already – It’s her first final of a major ASP event and puts her in an exceptional position to qualify for ASP Women’s WCT season 2014.

The Burton Toyota Pro Round of 24 surfers surfed seven heats to bring the field down to the final 12 who will surf their final tomorrow.

Number one seed and reigning ASP World Champion Joel Parkinson survived a tight heat by advancing in second place behind a very impressive Marc Lacomare from France who won the heat with powerful backhand moves and tube rides.

“I like the waves here,” said Lacomare. “It’s good for tube-rides and then there’s big sections of the wave which allow powerful turns and that suits my style.

“To defeat Joel Parkinson in a heat is a very big boost in confidence for me – he’s the champion and hopefully I can beat him again tomorrow on finals day!”

Despite almost cyclonic wind and rain, hundreds of spectators walked out to the remote harbour wall to see many of the best surfers in the world put on a classy display.

Joel Parkinson was the crowd favourite and some of his outstanding tube rides both in the warm-up surf sessions and early in his heat delighted the spectators.

“Amazing to see all these people here to watch the event” said Parkinson who enjoyed watching the final heats of the day. This is some of the worst weather I’ve experienced at a surf event but great waves brought the spectators here and I’m stoked to be in the event on the final day.”

“Two seconds in the last couple of heats is OK – I’ve advanced and that’s what counts at this stage – Hopefully I can save my winning form for the final heat tomorrow!”

Final heat of the day saw the biggest upset of the event so far when second seed Adriano De Souza of Brazil was eliminated by Australian pair Jay Thompson and Nick Squires who both charged the barrels to advance to tomorrow’s final day.

Logistically running an event at the Harbour was extremely difficult as judges were forced to cramp in a van and organisers were extremely hampered by torrential rain and sand blasting winds but given the waves and the realisation at days end that history had been created along with fantastic surf for the competitors, the day was worth the effort.

“What a credit to the staff here at Surfest – We’re all exhausted but to hear at the end-of-the-day that we created history has put a smile on all our faces, ” said ASP Australasia General Manager Dane Jordan.

They are hopeful of returning to Merewether Beach for the final day but the local surfers combined with ASP staff will do what it takes to finish this event in the best conditions and crown 2013 Surfest Newcastle Australia champions tomorrow.

The 2013 Surfest Newcastle Australia features the Burton Toyota Pro (Men’s ASP 6-Star) and the Hunter Ports Women’s Classic (Women’s ASP 6-Star), along with eight supporting events. The event is made possible with the support of Burton Toyota, the Hunter Sports Sports Group, Newcastle City Council and the NSW Government through Destination NSW. Surfest Newcastle Australia is conducted over 12 days from February 13-24 at Merewether beach, a recognised Australian National Surfing Reserve. Merewether is home to festival patron and Australia’s most accomplished men’s world professional surfing champion, four-time world champion Mark Richards (1979-82) and presents the winner a trophy in his likeness. 2013 marks the festival’s 28th year and with over 800 national and international competitors, Surfest Newcastle Australia is the largest festival of surfing in the southern hemisphere. Get up-to-the minute updates, photos and interviews, as well as the program of events at surfest.com or follow us on Facebook or Twitter.