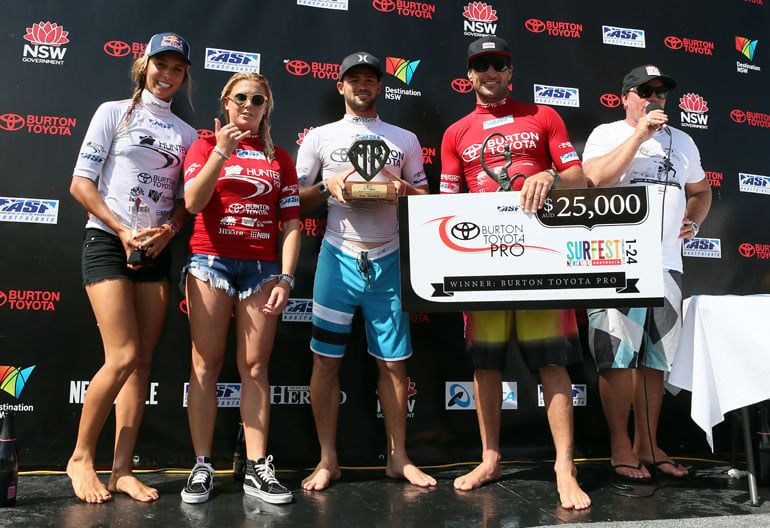 In front of a huge crowd at Merewether Beach Parkinson stamped his authority on this final in the opening minutes on his first ride unleashing some massive moves on the outside then finishing with a series of on-edge critical moves on the shore break scoring an 8.90 (out of a possible 10) which was the highest scoring ride of the 30 minute Final.

“It’s great to win this first event as the World Champion – I had an incredible end to last year’s season and I came into this event with a lot of confidence” said Parkinson.

“It was sort of a warm-up event here but the field is fantastic and we surf these events to win.

“It is a real honour to win this event and for sure I feel ready for next week,” added Parkinson who begins his ASP World Championship season at the Quiksilver Pro on the Gold Coast next Saturday.

For Muniz today’s result was also a solid warm-up for the world ranked number 18 surfer and while clearly disappointed after the final he will also take confidence into next weeks Quiksilver Pro.

Stormy 2m (6-feet) surf at Merewether Beach in Newcastle suited Stoyle perfectly and she waited until half way through the final before taking a good first wave.

Stoyle’s patience paid off as the ideal wave choice resulted in a decisive 8.67 excellent ride which set up the final win on a score-line of 14.67 (Stoyle) to Fitzgibbons on 13.67.

The 21-year-old Stoyle from the Sunshine Coast of Qld has had an excellent junior record but today’s result is by far her biggest and sets her up superbly in her quest to qualify for next years ASP elite World Championship Tour.

“I can’t believe I won,” said an excited Stoyle after the final.

“I could not hear the scores out there and it wasn’t until I came in that Sally (Fitzgibbons) told me I won – It was so cool that she chaired me up the beach – she’s a close friend and I really look up to her.”

Stoyle will compete in the trials for next week’s Roxy Pro on the Gold Coast on Friday aiming to try and win the one wildcard available into the Roxy Pro.

Fitzgibbons now heads to the Roxy Pro on the Gold Coast with a win and a second in the lead in tournaments and a lot of confidence following her performance yesterday where she scored a near perfect 19.43 in her Semifinal win.

“These lead-in events have been good to me – a first and a second is good preparation and I feel really confident for next week’s Roxy Pro” said Fitzgibbons.

“Particuarly yesterday in those challenging waves and to score a near perfect heat score in my Semifinal has me in a good frame of mind – I’m ready to go.”

The Roxy Pro is the opening event to the 2013 ASP World Championship Tour season and begins next Saturday March 2nd.