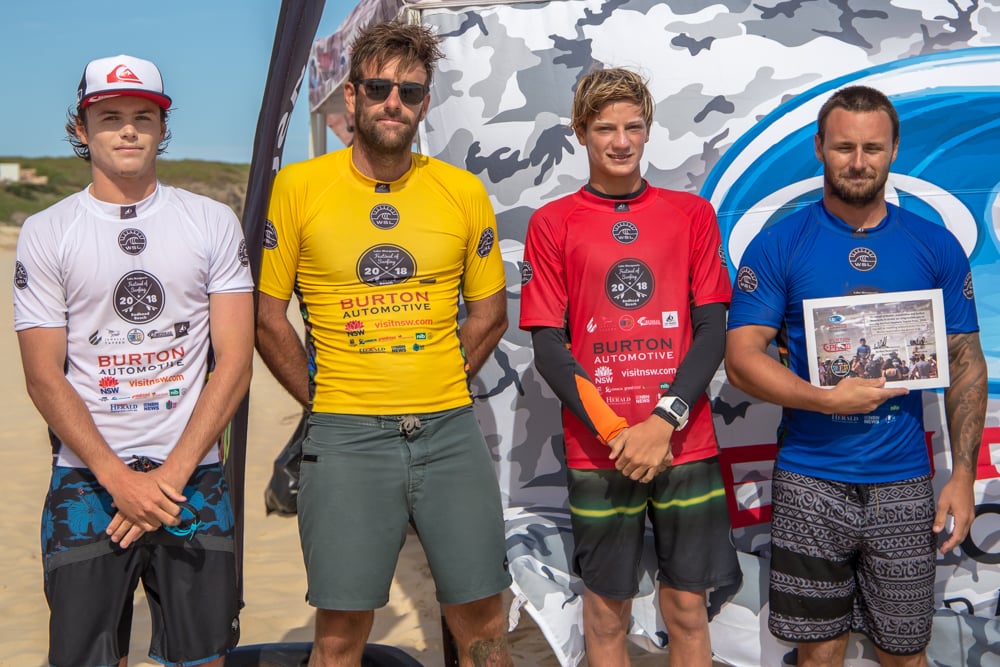 In challenging and small but clean surf 24 of the best male surfers from the length of the east coast of New South Wales competed over three rounds and a final in the Port Stephens Toyota Trails to earn valuable wildcard entry into the WSL 6000 Burton Automotive Pro round of 96 commencing on Merewether beach February 19 to 25.

Troy Skillin, Norah Heads triumphed after a see-sawing final where Birubi Beach teenager Mike Clayton-Brown pushed Skillin every minute of the close twenty minute final. Skillin is on a winning streak at the moment after winning the Catho Classic open men’s on Catherine Hill Bay, NSW three weeks ago followed by a win in the open men’s short board at the Lake Mac Festival of Surfing last weekend.

Also in the final and competitive to the end was Dane Atcheson, Avoca who sits 13th on the 2018 WSL Qualifying Series ladder. While Joel Paxton, Byron Bay, who finished third on the 2017 WSL Australia/Oceania Junior tour needed a second high scoring wave to challenge the others for the win.

Skillin said after his win, ‘I’m not chasing the WSL QS. I entered to have a fun and to see how I’d go against this level of competition. I’m a family man now so going on tour is not an option. I’m pretty excited though to get the chance to surf against an international field.’

In the WSL 6000 Grandstand Sports Clinic Women’s Pro trials a mix of very talented teenagers and young, but experienced surfers put on an impressive display of progressive surfing in the conditions. Alysse Cooper, Queenscliff NSW led from the start needing a strong score at the end of the 20 minute final to cement her win. In a display of consistency and explosive moves Cooper earned the wildcard in the Grandstand Sports Clinic Women’s Pro round of 48 on Merewether beach February 19-25.

Copper said, ‘I’m excited for the challenge ahead of me. I’ve competed in a couple of WSL 6000 events before so I know what to expect. I’m looking forward to doing my best in 2018 and hopefully end the year with a good WSL QS ranking.’

Runner-up Vittoria Farmer, Noosa Heads, Qld who just missed a spot in the quarter finals of the recent WSL 1000 Carve Pro on Maroubra beach performed consistently through the trials needing a big score to pass Cooper.

Birubi beach teenager, Elle Clayton-Brown showed all her local knowledge but could not match the combination of connected turns displayed by Cooper. In fourth spot diminutive and incredibly talented teenager Sabre Norris, Newcastle wasn’t able to back up her earlier win in the nib Pro Junior women’s wildcard trials.

In the nib Pro Junior trials teenager, Joel Vaughan, Shelley beach NSW won convincingly while Newcastle surfer, Sarbre Norris lifted her effort after a number of seconds in heats leading up to the final.