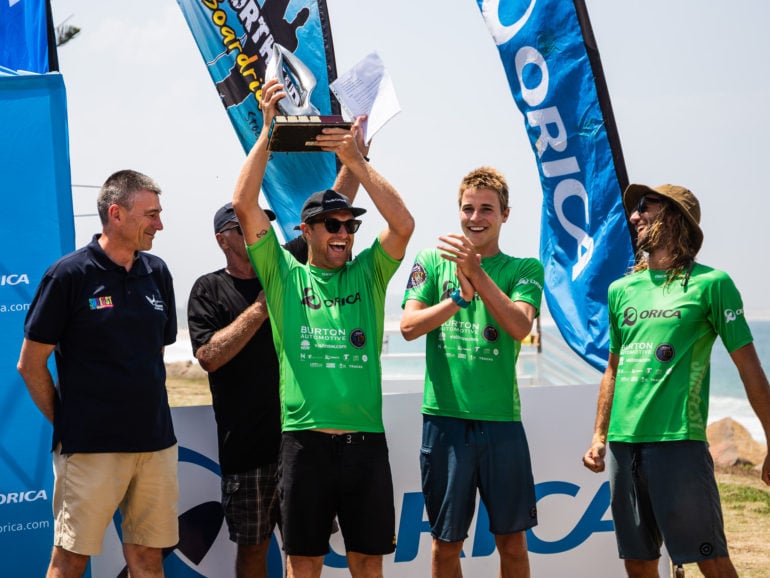 NORTH Avalon’s A team won “the battle of the norths” today and ended a seven-year drought at the ORICA Teams Challenge when it edged out North Steyne, North Shelley and North Narrabeen in today’s final held in challenging conditions at North Stockton beach.

Ans in doing so, the North Avalon Surfing Association managed to go one better than it did at the same event back in 2016, when the team was runner-up to North Narrabeen.

Brutal heat with temperatures in the high thirties until Sunday’s welcome southerly at around 11am made for tough conditions for both spectators and supporters across the weekend. The north-wester fanned the north-east swell which increased in size for the Sunday afternoon finals and waves up to a metre could be found on the incoming tide. Allowing for some high-performance surfing.

Twenty boardriding club teams consisting of five members challenged for a total prize purse worth $10,000. The ORICA Teams Challenge, now in its eighth year, is held as an integral part of Surfest Newcastle Australia and hosted by Stockton’s Northside Boardriders,

“We’ve competed in the past seven events here and love it. We’ve got a great rivalry with North Narra and we are both a couple of the biggest boardriding clubs in Sydney. We always end up heckling each other but to get the win today is great,” Carroll said.

“It’s a great way to start the 50th anniversary of the club. A big thanks to Northside Boardriders who really look after us when we come to Stockton,” Salisbury said.

“The local community is so good. We had a couple of beers at the Boatrowers last night with some of the local crew and everyone was so welcoming,” Salisbury added

“It’s been ORICA’s pleasure to support this event for eight years and it’s going from strength-to-strength. We are certainly committed to it going forward,” he said.

Surfest’s next event is the Lake Mac City Pro Junior to be held at Redhead beach next weekend.