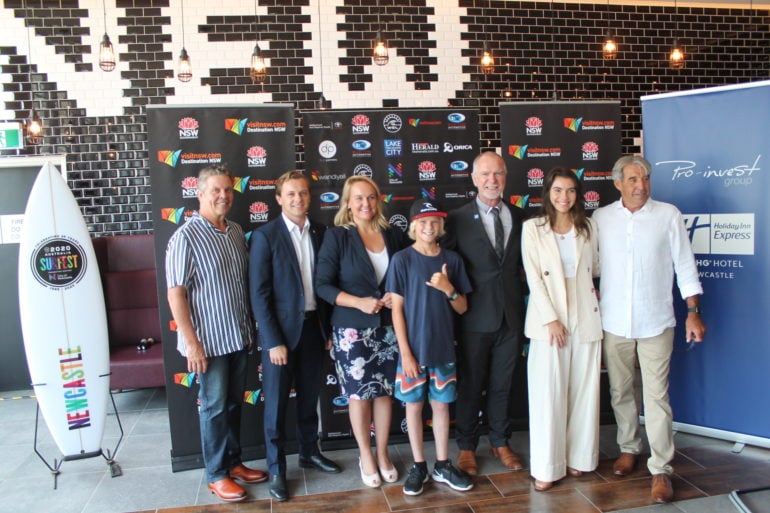 And those numbers are likely to rise, as competitors in those events still have until February 4 to enter. There are already more athletes lining up for both of Surfest’s World Surf League Qualifying Series 5000 events than there are places available.

Organisers are considering the logistics involved in running trials to determine the final fields of competitors in Surfest’s flagship events.

The Lake Mac City Pro Junior has also seen more junior men and women seeking to book a spot than there are places available. More than 100 surfers will converge on Redhead beach on the weekend of February 8 and 9 to contest the World Surf League’s Junior Qualifying Series.

“It’s a great boost for Newcastle and New South Wales to see this many countries being represented and it’s a massive show of support for the 35th Surfest,” organiser Warren Smith said.

“There is a growing sense of history around the biggest surf festival in the southern hemisphere that continues to draw national and international emerging and experienced competitors. We also see their partners, families and supporters coming to the Hunter’s premier annual international sporting event,” he said.

“Surfest 2020 is expected to attract more than 1,600 visitors to Newcastle and generate almost $2.1 million in tourism related expenditure for the region,” Minister Ayres said.

“This kind of boost is invaluable to Newcastle and the surrounding area, and demonstrates how important tourism and events are to our regional NSW communities, many of which really need the support generated through visitation right now.

“NSW is the rightful home of world-class surfing in Australia and Surfest is undoubtedly among the esteemed events on the international calendar. To see the Surfest program unfold in Newcastle with hundreds of competitors from around the world is the best billboard our State could ask for.”

Surfest Newcastle Australia offers 13 different surfing and cultural events in-and-out of the water across three local government areas in the Hunter and runs until Sunday 8 March.

The next event in the packed Surfest schedule is the ORICA Teams Challenge. One hundred surfers in 20 teams from NSW board clubs have entered the event and will converge on Stockton beach this weekend.

Out of the water, Surfest offers the Redhead Pump music event for under-18s, the Drop Festival and the “Barrelled” Wine, Food and Beer Festival.