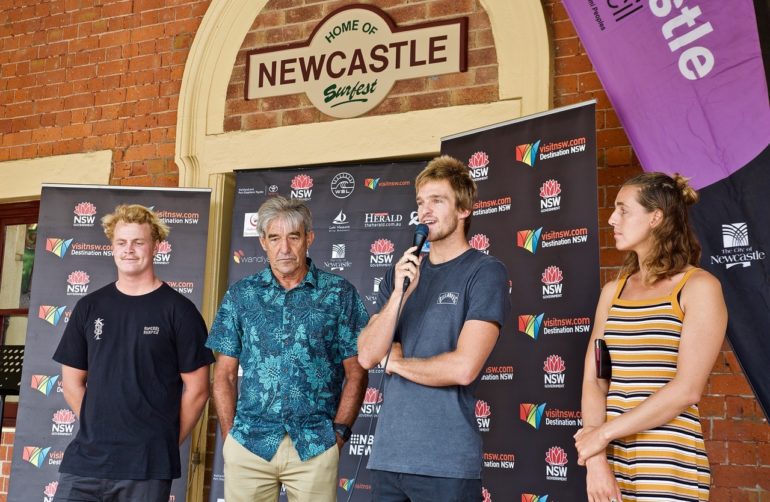 With a whopping 16 different surfing and community events in-and-out of the water, the 2019 Surfest Newcastle Australia looks like being the biggest and best yet!

Newcastle’s only annual sporting event – drawing more than 700 competitors from over 20 countries – will again provide a huge boost to the visitor economy along the Hunter’s coastline across three different local government areas.

Both locals and visitors will be spoiled for choice with a massive range of surfing action and community events on offer.

Minister for Tourism and Major Events Adam Marshall said the NSW Government is proud to be supporting the largest surfing festival in the southern hemisphere.

“With its world class beaches and surf breaks, Newcastle is the perfect place to welcome over 700 surfers from around the world,” Mr Marshall said.

“I wish all competitors the very best of luck this weekend and strongly encourage everyone visiting for Surfest to take some time to experience everything the Hunter region has to offer.

“From the natural beauty of the coast and valleys to world class food and wine, there really is something for everyone.”

The 34th Surfest gets underway in 2019 on Saturday 2 February with the Port Stephens Toyota Wild Card Trials planned for Birubi beach in the Port Stephens local government area (LGA). Aspirant surf pros will be looking for a win in these trials that will catapult them into the advanced rounds of Surfest’s main events – the World Surf League’s 6000 point Burton Automotive Pro for men and 6000 point Holmes Civil Developments for women. As well as the action in the water, there’ll be Street Food Social offering the region’s best food trucks, markets and entertainment overlooking beautiful Birubi beach.

Next up following the Port Stephens Toyota Wild Card Trials – on the weekend of February 9 and 10 – the surfing action moves to Redhead beach for the Lake Mac City Pro Junior, where more than 100 of the world’s best male and female juniors will be looking for early season points to boost them up the ladder of the World Surf League’s Regional Junior Qualifying Series.
On the weekend of February 23 and 24, surfboard clubs from NSW will converge on Stockton beach looking to have their name etched on the trophy for the Orica Teams Challenge.

Surfest then moves to Merewether beach and will commence with the Wandiyali Indigenous Classic – the nation’s richest contest for Indigenous surfers – on the weekend 2-3 March. That will be followed by the Go Kindy High Schools Team Challenge on Tuesday 5 and Wednesday 6 March, Westfield Kotara University Team Challenge on Friday 8 March, and the Sanbah Cadet Cup presented by the University of Newcastle on the weekend 9-10 March.

And if that’s not enough surfing action, Surfest will again host the Evolution Corporate Charity Teams Cup for the Mark Hughes Foundation. Last year this incredible day raised over $90K through the generosity of local businesses and participants. All funds raised go toward funding research focused on finding a cure for brain cancer.

The 2019 Surfest will see plenty to do onshore too. On Saturday February 23, the Sacred Tree Community Markets featuring arts, crafts, music and food at Stockton will complement the Orica Teams Challenge. Friday March 1 will see the Hunter Business Golf Group Surfest Golf Day, and the final weekend of Surfest offers both the Barrelled Food and Wine Fair at Jefferson Park in Merewether on both Saturday 16 and Sunday 17 March and live music at The Drop Festival at King Edward Park on Saturday 16 March.

“Once again the community support for this event is what gives it solid foundations that recognise its history while thinking about its present and future . Our sponsors and the NSW Government believe the event provides a terrific boost to local businesses as well as a great few weeks of surfing competition and fun for all that come along,” he said.