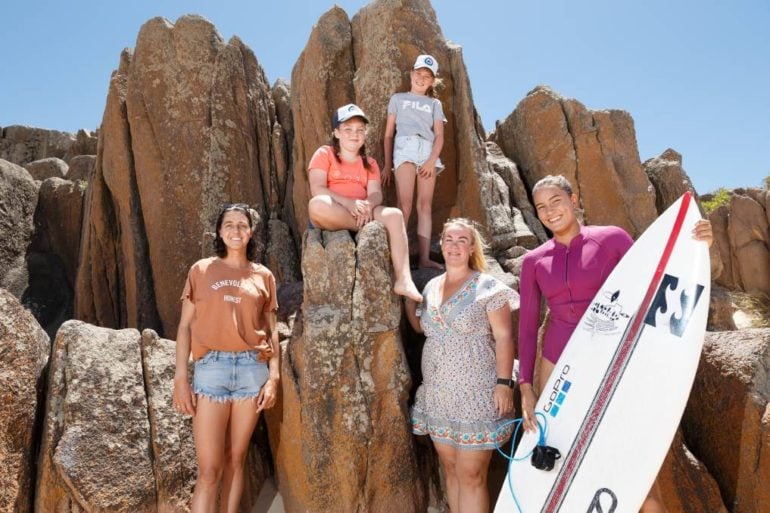 Friendships Kirsten Ansell’s 11-year-old daughter has struck up with women pro surfers during Newcastle’s Surfest have given the New Lambton resident an idea she is hoping to take worldwide.

The Ansell family has been involved in the crowdfunding initiative for the women’s competition of Surfest since 2017, through which Ms Ansell’s daughter Zara, a keen surfer, has met some of her idols.

In 2019, the family sponsored 18-year-old rising star Pacha Light. “She was amazing,” Ms Ansell said. “Zara took the morning off school and watched her heats, and through Pacha we also met Alyssa [Lock]. It was inspiring for my daughter.”

Through the pair of young surfers, however, Ms Ansell realised there was more Novocastrians could do to support the women’s competition. Zara asked her family if Lock and Light could stay with them during Surfest 2020, leading Ms Ansell to consider other competitors.

“A lot of the girls are self-funded, they are sharing rooms,” she said. “Big sponsorships are not common these days.”

Ms Ansell has founded a not-for-profit organisation called Host-A-Surfer. The premise is that local families volunteer to provide a spare bedroom for women competitors, as well as a few hot meals and a spirit of support. Ms Ansell is hoping the organisation will go on to coordinate billeting for competitions nationwide and even around the world.

“We’re targetting families,” she said. “Because it’s really to inspire our kids, boys and girls – to say, hey, you too can make anything possible.”

Surfest coordinator Warren Smith said he “fully supported” the idea, saying it would be especially beneficial for surfers in their first years of touring to have access to a family home.

Light said Host-A-Surfer would “change the game” of competing, which she said could be “very expensive”.
She calculated those competing in the Women’s Qualifying Series without sponsorship could spend more than $20,000 in flights and accommodation per year.

The Gold Coast surfer, who does have sponsor support, was particularly enthusiastic about the program’s focus on introducing pros to “young grommets” after meeting Zara this year.

“I started surfing when I was 10, the same age Zara was, so it felt like a cool connection to make,” she said.