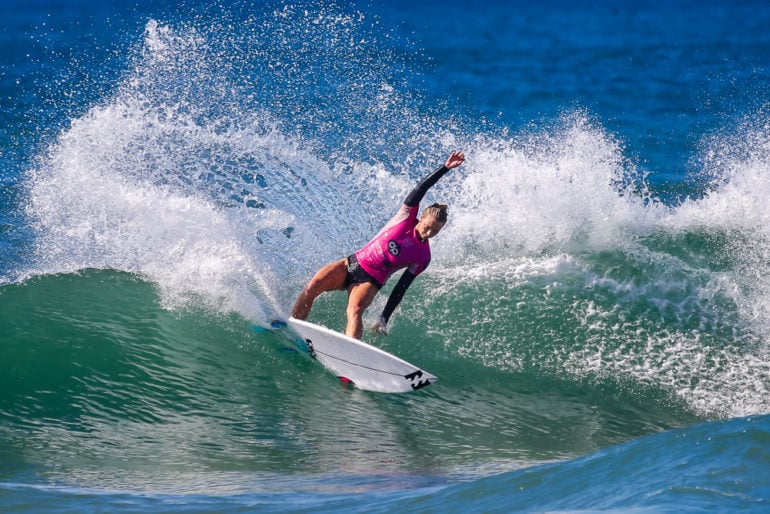 MEREWETHER BEACH, Newcastle NSW /AUS (Friday, March 6, 2020) – Merewether has once again turned on pristine conditions for the fifth day of competition at 35th annual Surfest Newcastle Pro presented by Burton Automotive. Competitors were treated to dropping but super clean two-to-three foot perfect beach break peaks and although the waves became slower throughout the day, the action didn’t disappoint with huge scores getting dropped throughout the day.

West Australian Bronte Macaulay (AUS) is no stranger to the Hunter regions beach breaks having travelled to the area annually since she was a young competitor. The elite Championship Tour (CT) competitor displayed her comfort at Merewether today, posting one of the highest two-wave totals of the event so far, a 17.40 combination which came from Macaulay’s impeccable backside surfing. Bronte will progress onto finals day with the confidence that she can outscore anyone in the draw.

“It definitely feels nice to post solid heat totals,” Macaulay said. “It makes you feel that all the work in the off season was worth it and gives confidence in your boards. Once you’ve had a few months off it’s hard to gauge how your surfing is going so it is definitely a bit of a booster. I’m happy to be back here starting the year off again, I really love Newcastle.”

The highest heat total of the event so far both men’s and women’s went to Isabella Nichols (AUS) who posted an 18.33 two-wave combination this morning at Merewether. Nichols looked unstoppable in the clean conditions, bashing the lip and carving hard to move onto Finals Day with the hopes of going one step further than her 2019 result and finish Surfest this year on top of the podium.

“That would definitely be close to my highest ever heat total,” Nichols said. “I wanted to be on the good waves but I didn’t expect to end up with two nines but I’ll take it. I’m looking forward to a big finals day. Whoever makes it to the Final will have to surf four heats which is full-on but I won’t complain if I make it. I’m hoping we continue to get some pumping waves for tomorrow.”

Having fallen off the elite Championship Tour at the end of 2019, Hawaiian Coco Ho (HAW) is determined to have a big year at the qualifying and Challenger Series events in 2020. a two-time Surfest winner, Ho is determined to grab the 5000 points on offer and get her re-qualification campaign off to the perfect start ahead of the Challenger Series events in Manly and New Zealand in the coming weeks.

“It always feels good to come back to somewhere familiar and where you’ve had success,” Ho said. “It’s important to have a good feeling when coming to an event and this place is all familiar — flat whites, Tim Tams and driving on the left side of the road, it’s all good. I’m excited to be in this position this year. I really want to do well at these Challenger Series events. A win at one of them and you’re laughing your way back on to the CT but a good result here first would be ideal.”

Newcastle transplant and event top seed Julian Wilson (AUS) continued to cruise through the field at Merewether today, posting yet another solid heat total of 15.77 to take down Alejo Muniz (BRA) and Liam O’Brien (AUS) in their 25-minute match-up. Wilson adapted well as a southerly change roared through Newcastle, turning the clean conditions into onshore slop. The current world No. 11 showed his experience still finding the gems to take the win. Wilson and O’Brien will move onto Finals Day while Muniz will now shift his focus to the Sydney Surf Pro.

“It definitely slowed down a lot just before my heat,” Wilson said. “I was still confident I’d get some opportunities as the tide was coming in and I managed to make the most of the couple of waves that came my way. Anytime I choose to compete I want to give it my all — I’ve been caught out thinking a bit too much about spoiling QS campaigns but everyone at these events can do well so you can’t be complacent. I have so much respect for Alejo, I think he is one of the hardest working surfers on the planet. If it wasn’t for an injury last year he would have qualified and Liam just missed out as well so they’re all right there and you can’t give them an inch.”

Tomorrow is the last day of the Doyle Partners Women’s Pro. By days end on Saturday, we will have a 2020 women’s event winner at Surfest Newcastle.