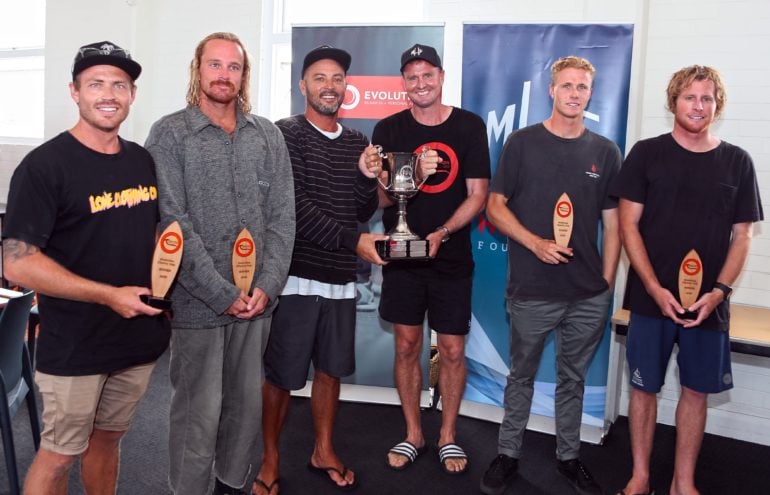 OVER $65K has been raised for the Mark Hughes Foundation at the Evolution Advisors Charity Cup held as part of the 35th Surfest Newcastle Australia.

That takes the total of funds raised by this unique event to more than $250 000 over the past three years. The Lake Mac lifeguards again took out the teams competition. Team captain Byron Howarth said the team was proud to support the event and rack up their second win in as many years.

“We are so stoked to be part of this event. I’d like to thank all the competitors and the City of Lake Mac Council for getting behind us so we can showcase what we can do as lifeguards and raise money to try and find a cure for brain cancer,” he said.

Evolution director Darren Glover said it was terrific to be able to raise money to assist the MHF in funding the Brain Cancer Biobank which is an essential part of brain cancer research.

“It’s great to be part of Surfest and have local businesses and surfers get behind a massive fundraiser for the Mark Hughes Foundation,” Mr Glover said.

“Given the current environment and the tough times that have impacted upon people in New South Wales and other parts of Australia, to have these 17 teams and 85 surfers make such a terrific contribution to brain cancer research is remarkable.

Two time world champion and former Surfest winner Tom Carroll surfed for the KCE team. TC is a major supporter of this event, having now taken part in the competition since its inception.

“We had a great team and got all the way to the semis. I’m honoured to come and support the fund raising efforts for brain cancer research which has a horrible rate of mortality. Mark Hughes is a great inspiration and this event gives the big surf community in Newcastle an increased awareness of the work of the MHF,” he said.

The auction after the event saw more money raised accompanied by generosity and laughs, with one keen supporter offering up $150 for a pristine roll of toilet paper personally signed by Mark Hughes.
Mark said it was a special, important day for the Foundation.

“It’s always a special day when Surfest and Evolution partner up for the Foundation. Good people coming together trying to find a cure for brain cancer and enjoy each other’s company and have a few laughs while we are at it.

“A big part of today is to raise funds to support our Biobank. The Biobank is what holds all the tumours which can be tested to further knowledge and so today is a very important day for the Mark Hughes Foundation,” he said.
Surfest chief Warren Smith said the event’s successful 35th year was made even better by partnering with Evolution Advisors and the Mark Hughes Foundation.

“Everyone at Surfest is totally stoked to see the money raised for the Mark Hughes Foundation and for research and support for those whose lives have been impacted by brain cancer,” he said.
Evolution Advisors Charity Cup