Stephanie Gilmore has started her 2017 competitive campaign with a near-perfect 19.00 (out of a possible 20) at the Anditi Women’s Pro in her opening heat of the event. Power and precision were the best ways to describe the six times World Champion’s approach as she sent a clear warning shot to her fellow competitors.

“Looking at the conditions before the heat I didn’t think I would be posting those sorts of scores,” Gilmore said. “That was really actually quite fun out there. I have been here for almost a week and that was my first heat so I was pretty hungry to get out there. That’s the sort of start to the year I like.”

In 2014, The Maitland and Port Stephens Pro was taken out by Alejo Muniz. Muniz, who has been on and off the Championship Tour (CT) for a few years with a knee injury, is back and feeling healthy. At the end of 2016, Muniz decided to rest up and make sure the injury was under control and nothing could stop him from competing in 2017. His first contest back is one that he has had two finals finishes at and today continued that good run with a heat total of 14.23 including an excellent 8.00 point ride (out of a possible 10).

“It is good to be back in Newcastle, it’s a place where I have enjoyed some success,” Muniz said. “This is the first time I have competed properly since my injury and it feels really good. That was a pretty tough heat so I’m really stoked to come out on top. I was competing at a few events last year and my knee was really sore so I decided too not go to Hawaii and rest up. I’m glad I did because I’m feeling good.” 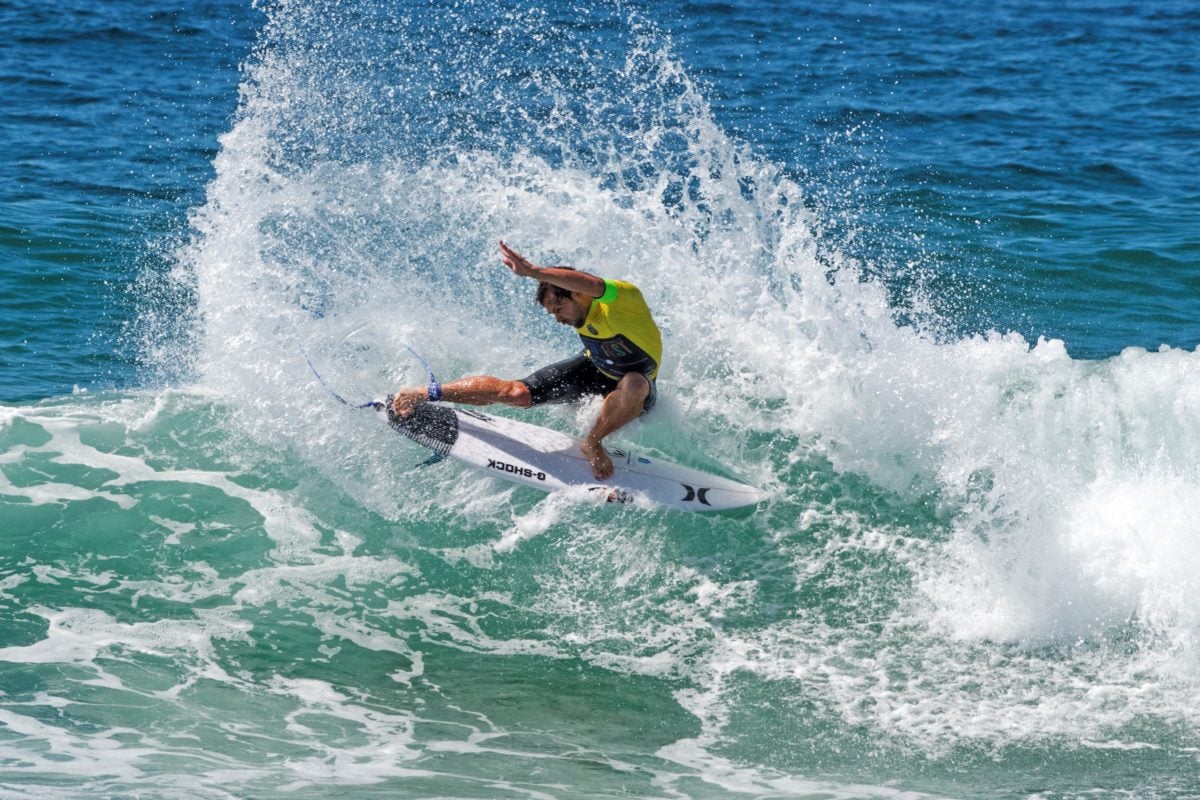 After a number of years of just missing out on qualifying for the Championship Tour, Sunshine Coaster Mitch Coleborn has decided to take a different approach to competition in 2017. The progressive goofy-footer feels that he needs to take it event by event and minimise the amount of stress he puts on himself during competition. With this new approach in mind, Coleborn took to the water in Heat Ten of Round Three and stuck to his gameplan. Coleborn went left and right during the heat, but it was his backhand that caught the attention of the judges who scored him a heat total of 12.86 to progress into Round Four.

“I love coming to Newcastle to compete, but I’ve never had an epic result here,” Coleborn said. “I feel like a good result here would give you a good roll early in the season so hopefully I can snag a decent result this week. The last few years I have chased the QS really hard and put a lot of pressure on myself, which has been tough. I think this year I want to take a more relaxed approach and try and enjoy myself a little more and just have fun with it.”

Finishing ahead of Coleborn in Heat Ten was another goofy-foot in West Australian Jacob Wilcox. Willcox also opted to show off his lethal backhand attack in a heat that was filled with big names. No one was able to catch Willcox who posted a solid heat total of 15.06.

“One thing that you have to learn about the QS is there is no such thing as an easy heat,” Willcox said. “All you can worry about is yourself and your own surfing, so that’s what I did in that heat. I felt good and am pumped to make a few more heats.”

Brazilian aerial phenomenon Yago Dora is better known for his incredible video parts and free surfing antics than he is for making heats. The young goofy-footer is keen to turn that around in 2017 and focus more on posting solid results on the QS. He started off on the right foot today, narrowly progressing through Round 3 with a good mix of power surfing and the airs he is known for.

“That was scary at the end,” Dora said. “I couldn’t find a back up for the whole heat so I could have lost at any minute. I feel like I got lucky out there. The last few years I have been really focused on doing trips and filming for movies and not really competition. This year I want to change that and compete and have a go at qualifying. I really want to do my best in every heat that I surf in.”

Once the Men’s Round Three was completed it was time for the Anditi Women’s Pro to hit water. It also was in Round Three, which meant the event’s top seeds would be hitting the water.

Heat One saw the No.1 Tatiana Weston-Webb put on an awesome display of rail surfing to progress. The current World No.4 was stoked to get back into competition after a long off-season. This was reflected in her surfing, which earned her a heat total of 14.13 and a heat win.

“Competing is a familiar thing for us so the off-season doesn’t have too much of an effect,” Weston-Webb said. “I trained pretty hard over the last few months and stayed focused, but it is good to be back in the jersey. I’m really looking forward to seeing what this year has in store for me.”

From the shore, conditions looked to be deteriorating at the beginning Round Three Heat Five. That was until Malia Manuel from Hawaii began to get on a roll and rip into the wind affected peaks at Merewether. After waiting for the last few days for her heat, Manuel went big posting an excellent single wave score of 8.27 for a heat total of 15.37, the second highest of the event so far.

“There was a lot of anticipation leading up to that heat,” Manuel said. “I have been waiting all week to compete so I was just stoked to get out there. The waves are actually really fun so I’m stoked they called it on. The waves are all over the place so you have to stay busy and just catch as many waves as possible. I just kept positive and it paid off.”