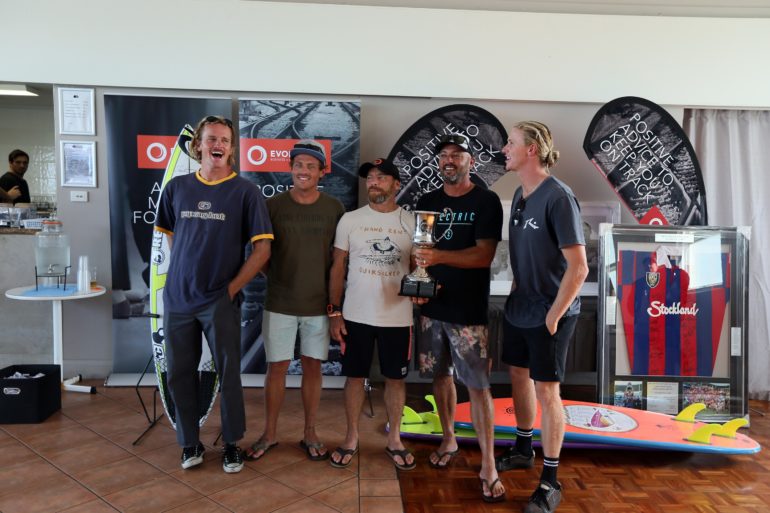 EVOLUTION Advisers Charity Cup has raised a whopping $100k for the Mark Hughes Foundation at Dixon Park beach as part of 2019 Surfest.

The corporate tag-team style surfing event saw 16 local businesses consisting of four surfers per team ride the waves for the Mark Hughes Foundation. The MHF raises much needed funds to promote research, heighten awareness and support brain cancer patients (children and adults) and their families within the community.

Special guest and two-time world surfing champion Tom Carroll put his support behind the event for the second year and was stoked this year’s Evolution Charity Cup exceeded the 2018 total of $95k.

“It’s a pleasure to be here today at Dixon Park raising money for the Mark Hughes Foundation,” the 1987 and 1989 Surfest champion said.

Mark Hughes said it was a magical and wonderful day.

“I guess the real magic happens prior to the event. And that’s when the 16 teams are out there asking the community for support and that is wonderful for me to witness,” he said.

“I could never have dreamt of the kind of support the Foundation has received, especially from this community here in Newcastle.

“This event has now raised almost two hundred thousand dollars and that’s something I’m very grateful for,” he said.

Hughes was diagnosed with brain cancer five years ago after presenting to a doctor after two days of headaches. He was 36 year-of-age when diagnosed.

“It’s so good to see the support the Charity Cup gets from local businesses and to raise this amount of money for the Mark Hughes Foundation ,” said Evolution director Darren Glover.

“From my perspective this doesn’t happen without some dedicated people and I ‘d like to thank everyone who has given their time, effort and donations,” he added.

The team from Kentan Machinery raised the most funds – a whopping $18,155.

Local artist Daniel Joyce painted a surfboard with caricatures of Tom Carroll and Mark Hughes that raised more than $1000 at the after-competition auction.

The day’s best wave was awarded to Morgan Ciblic from Port Hunter Conveyors, while Nick Shotter won the best wipeout.