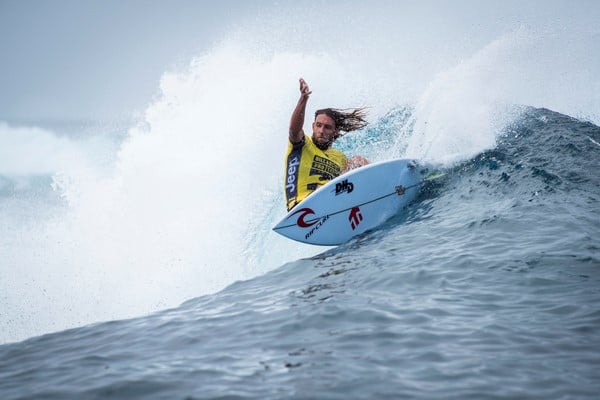 Merewether, NSW/AUS (Sunday, February 18, 2018) – A number of the world’s top surfers have arrived in Newcastle ahead of the Burton Automotive Men’s Pro and Grandstand Sports Clinic Women’s Pro which kick off tomorrow at Merewether Beach. The two WSL Qualifying Series (QS) 6000 events run in conjunction with Newcastle Surfest and will set the pace for the 2018 qualification race in what is forecasted to be incredible surf.

Two time Women’s World Champion Tyler Wright will kick off her competitive season at Merewether this week at the Grandstand Sports Clinic Women’s Pro. Wright has been working hard over the off-season with Coach Glen ‘Micro’ Hall and is primed and ready for competition to commence.

“I didn’t really take too much of an off-season this year – it’s kind of like my training with Micro never really ends,” Wright said. “We’ve been having heaps of fun during the summer and getting ready for the season at the same time. With the swell it should be a bit of a challenge, and I’m looking forward to getting things going here in Newcastle. I’m ready to go.”

In 2016, Championship Tour No. 5 surfer Matt Wilkinson began his most successful season to date with a win at the Burton Automotive Pro. In 2018, the electric goofy-footer will return to Merewether to warm up as he charges towards the world title race.

“The first event of the year is always a little nerve-wracking, but more than anything I’m excited,” Wilkinson said. “It just feels good to get the jersey on and get the jitters out, and being able to do it here in Newcastle is always good fun. I’m pretty excited for this swell too – it’s going to be solid.”

The anticipation is building as Tropical Cyclone Gita continues to churn out large, long period groundswell in the direction of Merewether. Waves anywhere in the range of 6-to-10 feet (2 – 4 metres) are expected for the opening days of competition guaranteeing incredible action.

Wandiyali Indigenous Classic winner Joe Haddon has received a wildcard into the event after a solid performance saw him take the win. Haddon’s experience and power paid off as he dominated in the powerful surf at Merewether today.

“I’ve been working really hard in the lead up to the Wandiyali Indigenous Classic,” Haddon said. “I’m so stoked to have gotten the win and have a chance to surf heats in the QS event. I’m really thankful to the Surfest crew, Wandiyali and the WSL for the opportunity.”