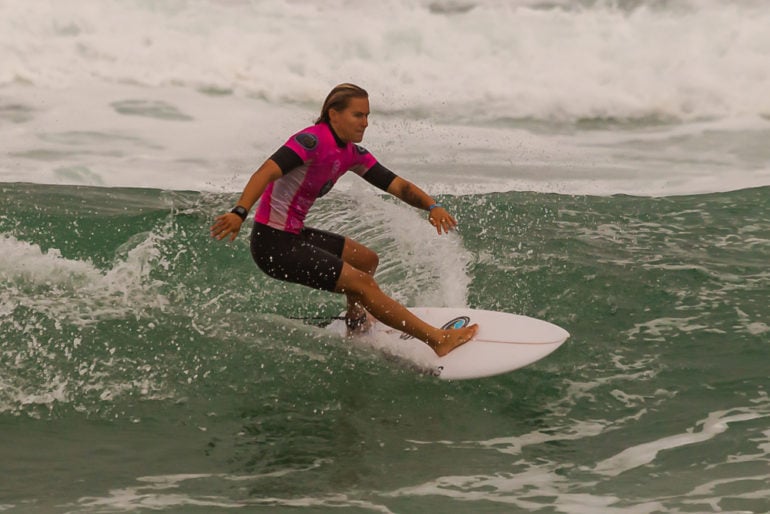 Having only recently returned to full time competing after a year off, filming for the reality TV show ‘House Rules’ Mikaela Greene (AUS) is almost back to the form that saw her win the Australasia Regional QS in 2016. Greene burst out of the gates in her Round 2 heat a 7.50 (out of a possible 10) on her first wave then backing it up to take her heat with a two-wave total of 12.80.

“That got close at the end and I couldn’t hear anything so I was pretty nervous,” Greene said. “I try to score my waves in my head so I have a bit of an idea of where I’m sitting in the heat. I was really focusing on wave choice as well which I feel played to my advantage. Every surfer in this event is so talented, so it really does come down to who is on the best wave so I’m stoked to have taken it. I try not to pay attention to anyone else that is in the draw — I just focus on myself and that seems to work.”

Former Championship Tour representative Pauline Ado (FRA) has been competing in Newcastle for almost a decade. Her experience in the ever-changing peaks of Merewether Beach paid off as the French competitor took a dominant win over an in-form Sarah Baum (ZAF) who snuck through the heat in the second spot.

“I’ve been coming to Newcastle for a long time now and have some really great memories,” Ado said. “It was a really close end to that heat and I didn’t know where I was situated so I’m stoked to make it. The waves are a bit tough today but there is still plenty of opportunity out there and when you find a good one it is fun so I’m looking forward to tomorrow.”

Gold Coast resident Alyssa Lock (AUS) had a slow start to her Round 2 heat, not posting a keeper score until inside the final 12 minutes of the 25-minute match up. Lock waited patiently, eventually finding a long walling righthander which gave her four sections to hit on her backhand. Lock eventually took the win, progressing into Round 3 with fellow Aussie youngster Molly Picklum (AUS).

“I knew that heat was going to be stacked coming in and that I’d have to do my best to make it through,” Lock said. “The conditions changed a lot in the lead up to my heat so the first half I was trying to work out where to sit and what waves to catch. I would have liked a quicker start to build my confidence but I got there in the end which is all the matters.”

Japan’s Minori Kawai (JPN) was in lethal form in the chunky wind affected conditions at Merewether, smashing huge turns to take her Round 2 heat. Kawai looked confident in the critical sections of the wave as she progressed in top spot with her compatriot Minami Nonaka (JPN) finishing in second place with both competitors moving into Round 3.

Keala Tomoda-Bannert (HAW), Anat Lelior (ISR) and Kobie Enright (AUS) were other standout performers in Round 2, all winning their heats with solid heat totals at Merewether.