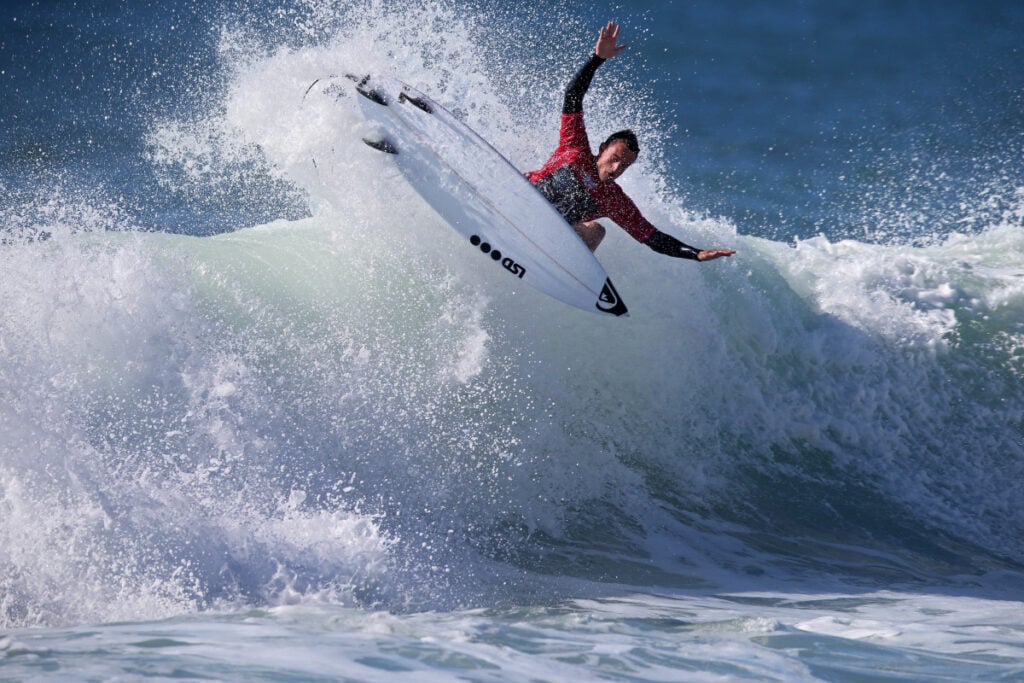 Newcastle NSW, Australia (Wednesday, February 24, 2016): With an overnight increase in swell and light morning winds, Day 3 of the Maitland and Port Stephens Pro and the Taggart Women’s Pro was filled with incredible surfing from some of the sport’s biggest names.

The first heat of the day was absolutely stacked with big names as Davey Cathels (North Narrabeen, NSW/AUS) took on Garrett Parkes (Byron Bay, NSW/AUS), former Championship Tour (CT) competitor Yadin Nichol (WA/AUS) and inform youngster Ethan Ewing (North Stradbroke, QLD/AUS). Cathels looked comfortable, patiently waiting for set waves, which the judges seemed to like, scoring him a heat total of 15.10. Cathels and Nichol progress to Round 3 as Cathels continues to prepare for his maiden year on the WSL CT.

“It feels good to get back in the water and compete I haven’t surfed an individual heat all year so I’ve been excited for this,” Cathels said. “I had some big names in that heat which was good, it’s always good to surf a heat that anyone could win, especially as I ready myself for the Championship Tour (CT). I’m glad to come out on top.”

Heat 11 of Round 2 was one to enjoy for the fans as Evan Geiselman surfed his first competitive heat since a horrible wipeout at Pipeline in late 2015 hospitalised him and almost caused him to drown. Geiselman looked smooth on his backhand, performing some beautiful rail surfing to post two medium scores and continue on into the next Round.

“It feels really good to get in the water and compete,” Geiselman said. “I took sometime off after Hawaii and didn’t really surf much so I’m stoked to be back in the water. I don’t think I surfed that well that heat so I think I’m lucky to have made it through, hopefully my next heat I can step up my performance a bit.”

Hometown hero Ryan Callinan was another 2016 CT rookie to progress through his heat at Merewether today. Callinan used his local knowledge to pick off a number of long right handers, gouging and slicing his way to the sand, much to the delight of the large group of cheering spectators he attracted to the beach.

“I heard a big cheer from the crowd on my last wave which was really cool,” Callinan said. “It definitely increased the pressure having all my friends and family watching, but it was really awesome. I never make heats at this contest so I’m glad to make that one – hopefully I can make a few more. It looks like we have swell coming so it should be a great week of surfing.”

Another 2016 CT rookie who took to the water at Surfest today was Coolangatta’s Jack Freestone. Freestone had a slow start to the heat not catching a wave for the first fifteen minutes. He eventually found a set wave which he was able complete a variation of manoeuvres on to score a 7.50 (out of a possible 10) and move into second position and the next round.

“I could not find a wave at the start of that heat,” Freestone said. “The heat before had plenty of waves then I think we caught the top of the tide so it was a bit stressful there at the start then final got a semi-decent one. I’m happy to get through that heat and get back into the contest jersey.”

Young Hawaiian Zoe McDougall was keen to impress after an uncharacteristic early exit during the NIB Pro Junior at Merewether on the weekend. McDougall came up against form surfer Macy Callaghan but was able to find a couple of runners that offered plenty of scoring opportunity. McDougall posted a round high single wave score of 8.67 with three huge forehand hacks.

“It’s always nerve racking coming up against friends,” McDougall said. “I know how good Macy and those girls are so I knew I would have to perform well. I’m stoked to make it to the next round and get the chance to surf against some of the top girls, some of the girls I’ve always looked up to. It will be a really cool experience.”

Competition resumes Thursday 25th with round of 48 Taggart Women’s Pro live on www.surfest.com