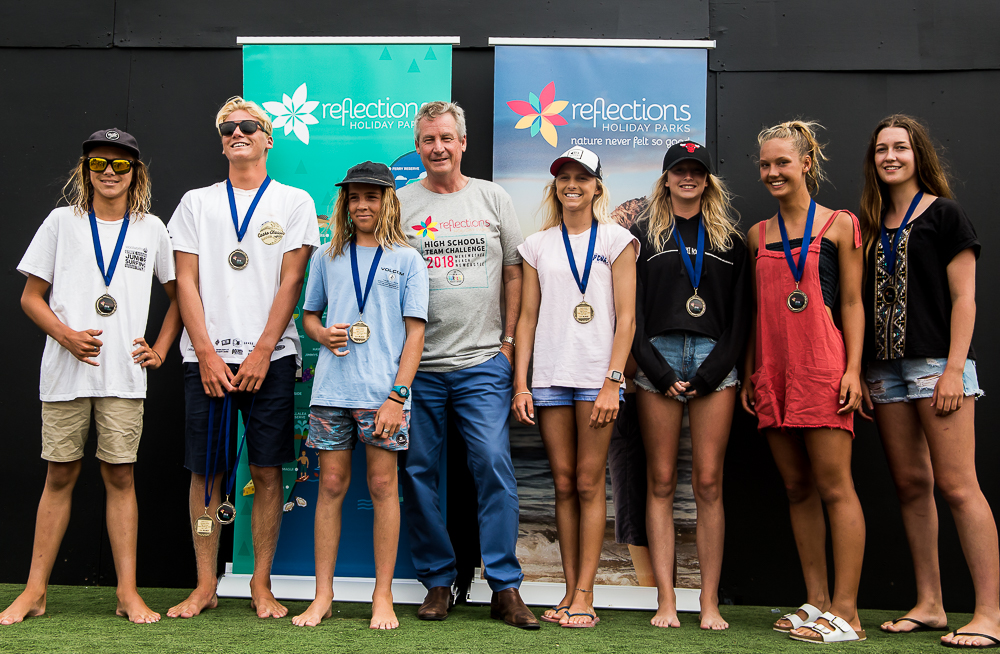 In the end, it was an all Newcastle affair in the boys division, with teams from Swansea High, Newcastle High and Belmont Christian College beaten by Swansea’s first team in a tightly contested final.

The stronger of the two Swansea High teams, consisting of Ethan Hartge, Jordy Liackman and Cooper Puttergill, took out all three of their heats on the way to the final, after a quarterfinal elimination last year.

Ranked second overall in the point score going into the semi finals, the team had a ‘quality wave’ mentality, focusing on the best waves rather than worrying about the bonus points system.

“The goal was to get three good waves in each heat,” Swansea High surfing co-ordinator Michael Duggen said.

“They all get coached outside of school, they are all a part of Frenchmans Boardriders Club, we surf once a week in school and we’re becoming a very strong surfing school,“ he said.

“We surf with Dan (Frodsham, of Newcastle Surf School), and he got us to practice 10 minute heats just getting two waves to prepare us,” Ethan said.

The boys are hoping to return as a group next year to defend their title, being pushed by a much younger runner-up Swansea blue team, consisting of year seven and eight students, in a school who entered five teams over the boys and girls divisions.

A team who certainly knows how to defend their title is Tuggerah Lakes Secondary College, Tumbi Umbi Campus’s girl’s team, winning the unique tag team event for the second year in a row at Merewether beach.

With a stack of talent, including the 16-and-under Australian champion Molly Picklum and fellow strong Shelly Beach surfer Jasmine McCorquodale, the Tumbi Umbi group rotated between four surfers throughout their heats on their way to topping the girls final.

“We have a lot of young girls coming up in the school, but these girls are great – Molly is national champ, and all the girls are just getting better every year and it’s great to see,” Mr Davis said.

With 42 boys and 15 girls teams entering the two-day event, CEO of the major sponsor, Reflections Holiday Parks, Steve Edmonds said being a part of Newcastle events as a Newcastle based company was very important.

“A big part of our guest lists at our parks are families that do a lot of surfing trips, and it’s really a part of our culture to reinforce outdoor activities, and with surfing being such a nature-based sport it’s the perfect combination for us,” Mr Edmonds said.

“We have 37 parks across NSW, and with Newcastle being close to Foster and Tuncurry it’s perfect for people to have a weekend away, or even closer we have Jimmy’s Beach and Hawks Nest, which are all great surfing spots for these young kids,” he said.