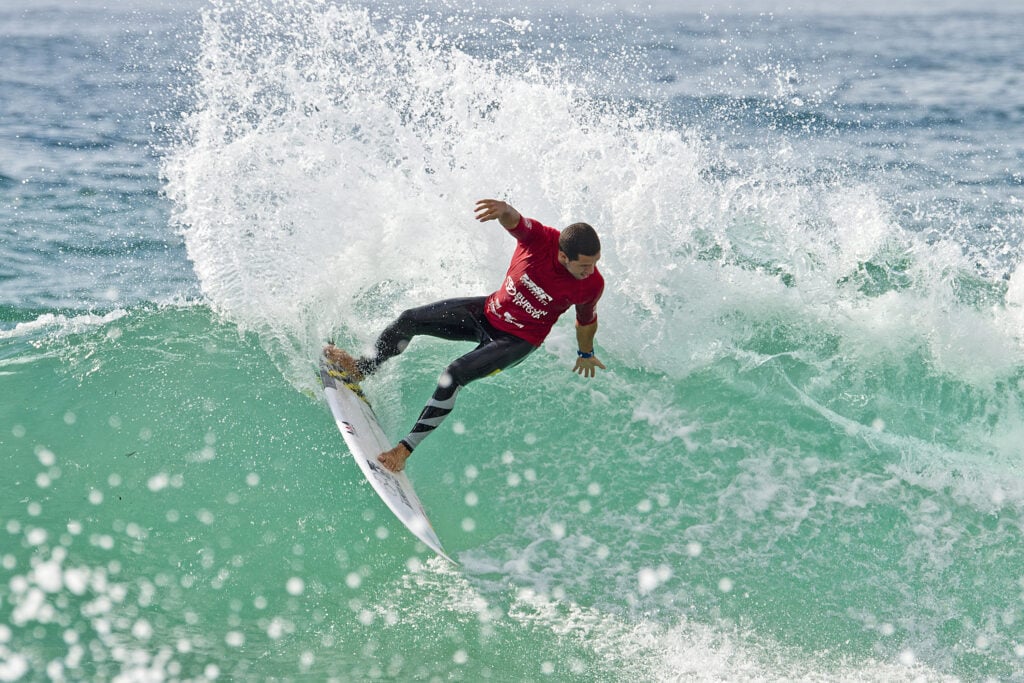 Both the men’s ASP 6-Star Burton Toyota Pro and the ASP 6-Star Hunter Ports Women’s Classic ran at Surfest Newcastle today, with top seeds doing damage to the scoreboard and their fellow competitors. The men finished the last six heats of Round 2 and the women completed Round 2 and started the top seeded Round 3 in the 3 foot (1.5 metre) surf at Merewether today.

“Dane (Reynolds) got me in the first round in Manly, so it’s good to get him back in that one,” Taylor said. “It was a low scoring heat and was scary until I got that 7-point-ride at the end. Stuey (Kennedy) and I were just trying to hold off Dane and (Michael) Dunphy, they’re both really good surfers and they only needed small scores, so it’s good to get through that one.”

Brazilian duo Adriano De Souza (BRA) and Willian Cardoso (BRA), who are both former Burton Toyota Pro event champions, put on a clinic at Merewether day today. The pair waited for the right waves, unloaded power turns right in the pocket, posted excellent scores and both advanced into the next round in 1st position.

“That was a tricky heat, any of those guys could have won,” De Souza said. “Kai Barger is a former ASP World Junior Champion, and the local guy Travis Lynch knows the line-up really well, so I just tried to keep myself in a good position and catch the best waves. I was really looking forward to this event. I love Newcastle, I won here in 2008 and have great memories.”

“I was a little lost out there but I got a score in the last minute,” Cardoso said. “I knew if the wave would come then I could get the score, so I was relaxed. I did three solid turns and got an 8.67 and I won the heat. Newcastle is a good place for me, I always get a good result here. Adriano (De Souza) and Parko (Joel Parkinson) are the ones to watch, Adriano won the last event in Manly and Parko is the defending event champion.”

Garrett Parkes (Byron Bay, NSW/AUS) looked like he was at a skate park on water at Merewether today, launching and landing a variety of technical aerial moves to finish 1st ahead of Brian Toth (PRI) who also advanced in 2nd position while Nathaniel Curran (USA) and Marc Lacomare (FRA) were eliminated in 3rd and 4th place. Parkes will now face off against Willian Cardoso (BRA), Davey Cathels (AUS) and Kai Barger (HAW) in Round 3.

“I’m stoked it was just like a little rip-bowl at home out there,” Parkes said. “All the guys in that heat have either been on the WCT or been really close, so it’s great to win that one – a confidence booster for sure. I’ve been doing Surfest since I was 12 or 13-years-old, there’s always good vibes and plenty of friends here. I always enjoy Newcastle. There’s not too many 6-Stars this year, and I lost first heat in Manly so this is an important event for me, but I try not to think too much about it or I’ll freak myself out.”

Malia Manuel (HAW) put together a jaw dropping and dominant display in her opening heat of the Hunter Ports Women’s Classic today. Manuel scored an event high 9.73 (out of a possible 10) and had a backup score of 9.40, netting the highest two-wave heat-total 19.13 (out of a possible 20), higher than anyone else in both the men’s and women’s draw. What’s more impressive is that her fast and stylish brand of surfing also saw her clock up two scores in the 8-point-range that she threw away as only the top two waves are counted.

“That’s one of the biggest heats I’ve had in a while and it feels great to start building momentum,” Manuel said. “It was fun! At the beginning of the heat all of the other girls had a wave and I didn’t have one and you just have to stick with your instincts, and know something is going to come for you and make the most of it. I didn’t come to Newcastle last year and it’s great to be back in this lovely town, I’m really enjoying myself.”

In the afternoon a massive storm struck Newcastle’s Surfest, but it didn’t stop five-time ASP Women’s World Champion and No. 1 seed in the Hunter Ports Women’s Classic – Stephanie Gilmore (Gold Coast, QLD/AUS). Gilmore opened with an excellent 8.5 ride, backed that wave up shortly after with a strong 7.83 to comprehensively take the heat on a two-wave tally of 16.33 over Demi Boelsterli (USA) in 2nd place on 11.10, with Anali Gomez (PER) and Brittani Nicholl (AUS) eliminated in 3rd and 4th.

“The storm decided to come in at the right time and freak everybody out which was fun,” Gilmore said. “It was good though, I actually enjoy surfing in the rain, it’s soothing. It’s a fun sand bank out here, I’ve been watching for a couple days and I was really excited to get out there and surf a heat. I always get worried at QS events that I’m not being aggressive enough, but then I sit out there being placid because I don’t want to hassle. There was a little bit of hassling out there, but I can’t blame the girls for doing that, I’d be doing the same thing if the situation was flipped around. They’re great surfers and they’re confident in their abilities and if they can keep me off a wave and get a good score themselves then they will win the heat.”

For more information, live webcast and photos log on to www.surfest.com
Surfest Media Including Photos and TV Newsfeeds can be accessed here – http://media.aspaustralasia.com.au/index.gallery.php?gid=209