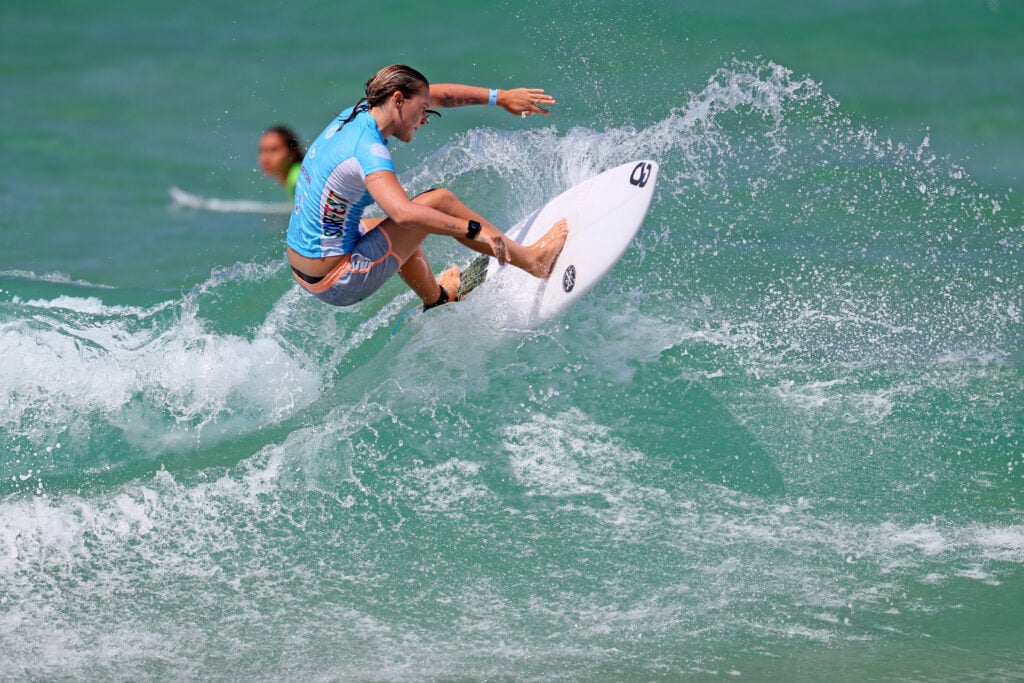 Having moved to Australia a few years ago from her home in South Africa, Sarah Baum (ZAF) is feeling at home at the beach breaks of Newcastle and it showed as she took out her opening round heat at Merewether. Baum first competed at Surfest as a 14-year-old and has fond memories of the event and hopes to see them continue when she takes on Summer Macedo (HAW), Kirra-Belle Olsson (AUS) and Josefina Ane (ARG) in Round 2 Heat 9.

“This was the first international professional surfing event I ever came to,” Baum said. “I remember it so vividly, staying up on the hill with my dad and surfing every day. I remember being in awe of how good the older surfers were so it’s pretty cool to still be competing at the same event all these years later. That was a bit of a grind that heat so I’m happy to make it through.”

Returning to full-time competing in 2019, Alana Blanchard (HAW) started the event in Round 1 with a low seed. The former Championship Tour competitor will be hoping to return to the elite level and join partner Jack Freestone, competing on the elite tour. Blanchard’s 2019 campaign didn’t get off to the best start today as she struggled in the small weak surf. Blanchard was eliminated by good friend Brianna Cope (HAW) and Lucia Martino (ESP).

Women’s Big Wave Tour member Felicity Palmateer (AUS) isn’t as well known for her small wave prowess as she is for her commitment in waves of consequence. The young Australian managed to hold on in Round 1, only catching two waves to win and progress over Amuro Tsuzuki (JPN).

“I’m still getting over a bit of an injury so have been warming up in the small QS events to prepare for this,” Palmateer said. “It feels good to get through that heat, especially as it’s a QS6,000. It’s always tough in conditions like that and although it’s a cliché everyone is dealing with the same conditions so you can’t get too down about it.”

After surfing in his first event outside of Hawaii for over a year just a week ago in Avoca, Dusty Payne seems to be well recovered from his life-threatening wipeout at Pipeline last January. Payne, who hasn’t surfed in Newcastle since 2009, kept his good form from the Central Coast going, progressing in the second spot behind Tomas Tudela (PER).

“It was really hard to pick the decent ones out there as it’s so nice and clean,” Payne said. “You don’t know which ones are going to wall up and which ones fatten out so I was stressing a bit on my wave choice. I feel like heats like that take about 10-years off your life so I’m happy to squeeze through. I haven’t been to Newcastle for nearly 10 years so it’s cool to be back and

One of the first heats of the day saw Indonesian prodigy Rio Waida (IDN) post the highest two-wave combination of the event so far, a 14.84 heat total. Waida waited patiently for the set and it paid off as he demolished two of the biggest waves to come through to clinch the victory.

“That is definitely a confidence booster,” Waida said. “After finishing third at the World Junior Championships I know I can post big scores, but to know I can do it in a QS6,000 is an even better feeling. I really want to go far at this event and set myself up for a big 2019 season on the Qualifying Series.”

After the hightide swallowed up the little swell that was left at Merewether, competition was called off before Women’s Round 2. Competition is likely to resume at Merewether at 7:00 AM AEDT.