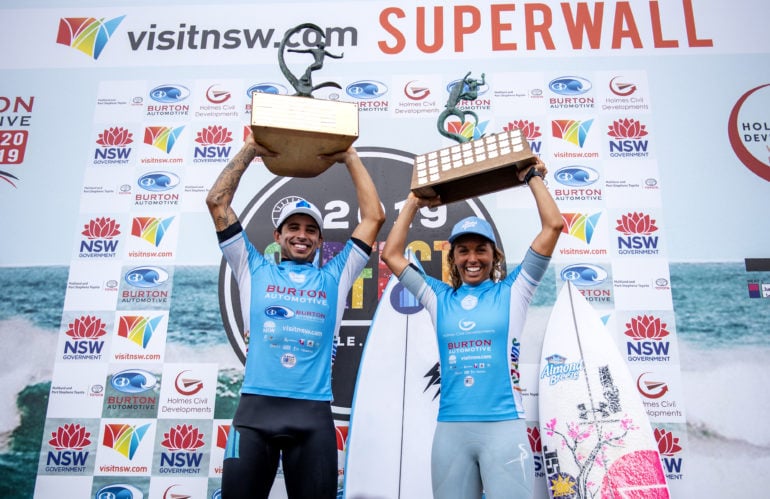 Merewether, NSW / AUS (Sunday, March 17, 2019) – Sally Fitzgibbons (AUS) and Alex Ribiero (BRA) have claimed victory at the 34th annual Newcastle Surfest, World Surf League (WSL) Qualifying Series (QS) 6000 event in excellent waves at Merewether Beach. The two had to battle through a huge field of surfers from all over the world to claim the first combined QS6,000 of the season.

Sally Fitzgibbons (AUS) now joins the likes of Mick Fanning (AUS), Pam Burridge (AUS) and Rebecca Woods (AUS) as a three-time Newcastle Surfest winner having already held the trophy above her head in 2012, 2016. Fitzgibbons, who has just recovered from a fractured shoulder, and has been dealing with a few other niggles was close to pulling out of the event at the start of the week. After a lot of hard work and preparation, Fitzgibbons was ready for the final day and looked impossible to beat, posting excellent scores throughout the event. In the Final of the Holmes Civil Developments Pro, the World No. 6 came up against perennial qualification threat Isabella Nichols (AUS) who was the form surfer of the event and although she went down to Fitzgibbons she still had the sportsmanship to chair her opponent to victory.

“To know that I had a couple of obstacles to get past at the start of the event and overcome them to take the win — This is a really cool feeling,” Fitzgibbons said. “I wasn’t really sure if I’d be able to suit up and perform without risking injury before the Championship Tour begins. I’m glad I got through it and could compete with everyone here as it’s so competitive and inspiring at these QS events. I have never had my fellow finalist chair me up the beach and I think it’s a really good reflection of Isabella’s character. We both have a lot of respect for each other’s surfing and have been spending time training together recently which has shown me how much her heart is in the right place, so that was a real honour. I know she’ll be on the Championship Tour soon.”

After qualifying for the Championship Tour in 2017, Alex Ribeiro (BRA) unfortunately injured his foot and spent the majority of the season on the sideline and failed to requalify. In 2019, the exciting young goofy-footer is keen to make a charge at getting back to the CT and today he took a step in the right direction, winning the Burton Automotive Pro with an amazing display of aerial surfing.

“I feel so amazing right now,” Ribeiro said. “It’s been an amazing day and to have a final with my friend Jadson was so awesome. I’ve been working really hard for the last year to get back to the top so this is a really special win for me. I’m stoked to have beaten Jadson because he has been in such good form so was going to be hard to beat. I want to get back on the CT and this result will go along way to help me get there so I’m so stoked.”

In the Final of the Holmes Civil Developments Pro, Fitzgibbons overcame former World Junior Champion Isabella Nichols (AUS) who was appearing in a QS6,000 final for the first time in her career. Having missed out on qualifying for the CT by the narrowest of margins for the last 3 seasons, Nichols was in need of a solid result to set up her year and have a good tilt at the Dream Tour. Today’s final result has rocketed Nichols to second on the QS rankings and is by far the best result of her adult career.

“I’m so excited with this result,” Nichols said. “I’ve made it to a semifinal before but to surf in a QS6,000 final with a surfer like Sally is really special. Chairing Sally up after the final felt so sick — I’ve always looked up to her and her surfing so I was stoked to have the opportunity to chair her up and was always going to do it — it was really special. Obviously, I would have loved to have won but I wanted to show her how stoked I was for her. I really hope this is my year to qualify but I know how long the year is so don’t want to get too far ahead of myself because there are plenty more events. This is definitely the best start to the season I’ve had so I’m stoked.”

In the Final, Alex Ribeiro had the tough task of taking on Championship Tour competitor Jadson Andre (BRA) who was fresh off a win at a recent QS6,000 in his home country of Brazil. Jadson was the man to beat, posting excellent scores throughout Finals Day for some huge airs in the peaky Merewether ramps. Andre, who now leads the QS rankings, had a premonition that he would make it to the final and not win the event but finish second.

“I have been trying to visualise winning all week but for some reason only thought I’d get second which is so strange,” Andre said. “I am so happy to see Alex win because he is such a great surfer and deserves to be back on the CT. This has been a great week here in Newcastle and it was great to have such good waves on the Final Day. I’m excited to compete in Manly now and hope I can get another Final result.”

2019 marks the event’s 34th anniversary, attracting over 850 national and international competitors from more than two dozen countries. Surfest Newcastle Australia is the largest festival of surfing in the southern hemisphere.