Merewether Beach, Newcastle, NSW/AUS (Tuesday, February 21, 2017) – Round 2 of the Maitland and Port Stephens Toyota Pro has been completed today and it brought with it the event top seeds for the first Qualifying Series (QS) 6000 of the 2017 season. Merewether Beach served up slightly wind affected 2-foot waves for the second day of competition as the Anditi Women’s Pro had another lay-day.

One of the biggest talking points surrounding this year’s Maitland and Port Stephens Toyota Pro has been the return to competitive surfing of Championship Tour (CT) superstar Owen Wright. Wright was out of action in 2016 due to an injury he received while surfing in Hawaii in late 2015. At the time, Wright was sitting in No.5 on the CT rankings and was a chance to win the World Title that year.

It has been a long wait for Wright and his fans and today the wait was over with the hard charging goofy-foot hitting the water a Merewether.

“It felt amazing to get back out there and compete – it was really emotional,” Wright said. “There is no doubt that this has been the hardest year of my life, a real roller coaster ride. Now I’m through the bad and on the other side of it I feel better, stronger and really excited to have this rash-shirt on and competing again.”

“The love and support that people all around the world have shown me since the injury has been amazing,” Wright continued. “It is so cool to see that there is so much love in this sport of surfing, it’s incredible. I want everyone to know how important this support and belief in me competing again was to actually coming back.” Caption: Wright pulling on the contest jersey for the first time since late 2015. Pic: WSL/Bennett

As soon as he caught his first wave, it was as if he had never taken a break, displaying the powerful and loose surfing Owen Wright is known for. Wright opted to sit on a separate peak to the other competitors and got busy, nailing lefts and rights to post a solid heat total of 15.33 and easily win his first heat back.

“It felt really good to go out there and smash some waves and compete again. I’m just enjoying being here with, my partner and my baby and just soaking up this moment. I was watching everyone surf out the front and thought if I could sit up there on my own I could snag a few lefts and rights that would suit me and my height and give me a bit more room to move on the face.” 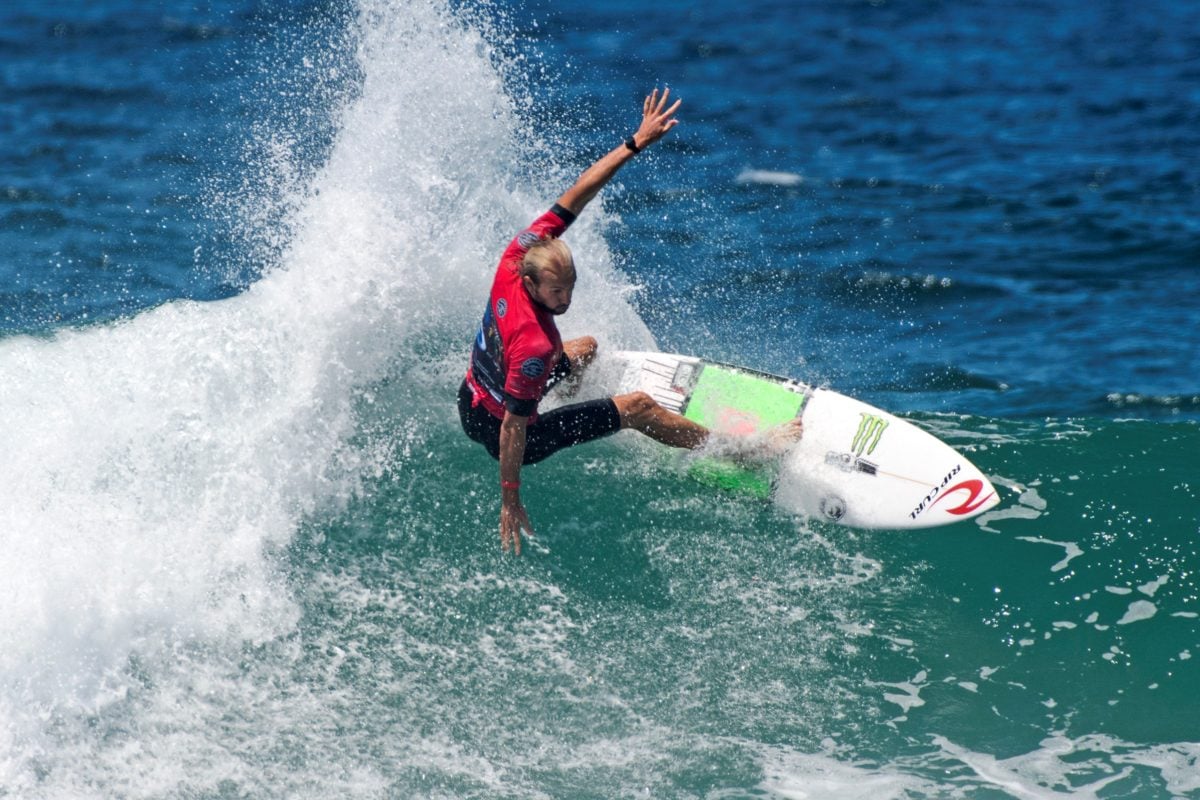 Caption: Owen Wright displaying the power and finesse we remember from him. Pic: WSL/Bennett

The first heat of the day brought with it a massive upset as WSL Championship Tour (CT) star and Maitland and Port Stephens Toyota Pro reigning champion was knocked out of the event in his first heat. Wilkinson was unable to find any scores of consequence and went down at the hands of Japans Yugi Mori and Brazilian wonder kid Samuel Pupo.

“I’m really happy to make that heat,” Pupo said. “The waves were pretty slow which always makes me nervous, plus I was up against Wilko who is an amazing surfer and the event’s reigning champion. That heat has given me some good confidence to keep going in this contest event if I come up against the big names.”

Hometown hero Ryan Callinan admits that competing in front of a home crowd can add pressure. In 2016, Callinan made the Quarterfinals at Merewether, which was a monkey off the back of the stylish goofy-footer who had struggled at his home event in years previous. Today Callinan posted an excellent 18.20 heat total (out of a possible 20), the highest of the event so far. He showed a good mixture of smooth powerful turns with some radical aerial maneuvers to convincingly win his heat.

“I still feel pretty nervous at this event,” Callinan said. “I think all of the awesome support and having people I know come to watch puts a bit of pressure on me subconsciously, but it’s good. Even though I fell off tour, the fact that I was on there for a year built my confidence and I feel like I’m surfing better than ever. Having a big score can freak you out because you know you need to back it up and not lose with a solid score. Eventually I backed it up and could relax and have fun.” Caption: Local lad Ryan Callinan on his way to posting one of the highest heat totals of the event so far.. Pic: WSL/Bennett

CT Star Jack Freestone surfed a flawless heat for his return to competition. Freestone stayed patient to pick off the bigger right-handers and post two excellent single wave scores for a heat total of 16.07 points.

“It’s great to get the jersey on and surf a heat,” Freestone said. “I’m stoked to come away with a win because it ended up being a close heat in the end. The waves are starting to get really good so it was fun out there. It’s nice having to excellent scores because you can dictate the heat and make sure no one else gets a good wave. It becomes a bit of a game of chess.”

Caption: Jack Freestone in control of his Round 2 heat. Pic: WSL/Bennett

Competition is continuing today with Round 2 to be completed by days end.