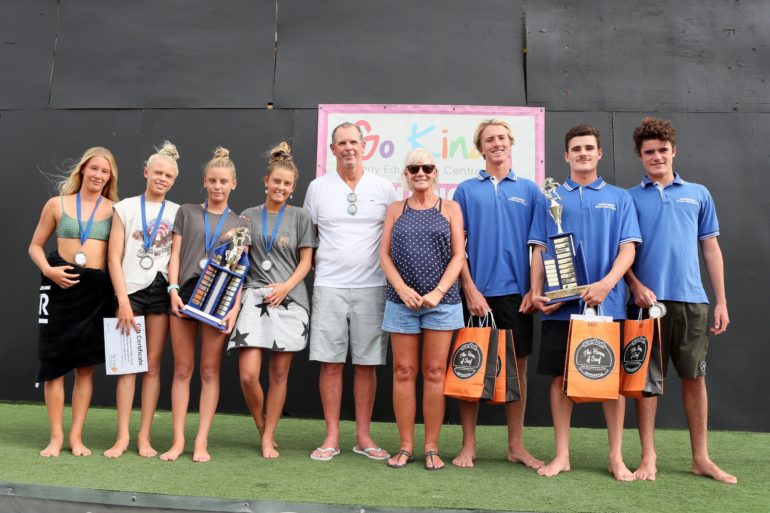 Twenty-five high schools entered a total of 57 teams for two days of competition in the contest at Merewether beach as part of Surfest Newcastle Australia 2019.

In beautifully crisp and clean 2-3 feet waves fanned by a north-westerly that blew the entire day, surfers were able to show the best of their ability over the Merewether rocks.

Back-to-back girl’s champs and competition favourites Tuggerah Lakes Tumbi Umbi couldn’t make it three in a row and were knocked out in round two.

Narrabeen High Team captain Ethan Raper said that coming out of the semis, his team didn’t notice the competition changes.

“They changed it from three waves to two and so you’ve got to get those two waves quickly.

Mackenzie Davidson from St Peters Catholic College Tuggerah said it was so much fun competing at Merewether.

“We had really good waves. We couldn’t be happier but it was definitely hard and all the girls were surfing really well,” she said.

Surfest organiser Warren Smith said the shift to a later time in the first term and the number of schools with multiple teams resulted in the huge increase in entries.

“This event is growing every year. It’s terrific that schools from Port Macquarie in the north to Illawarra in the south come to Surfest and stay for a couple of nights with family and supporters,” he said.

The next event at Surfest Newcastle Australia is the Westfield Kotara Uni Team Challenge which gets underway on Friday at Merewether beach.