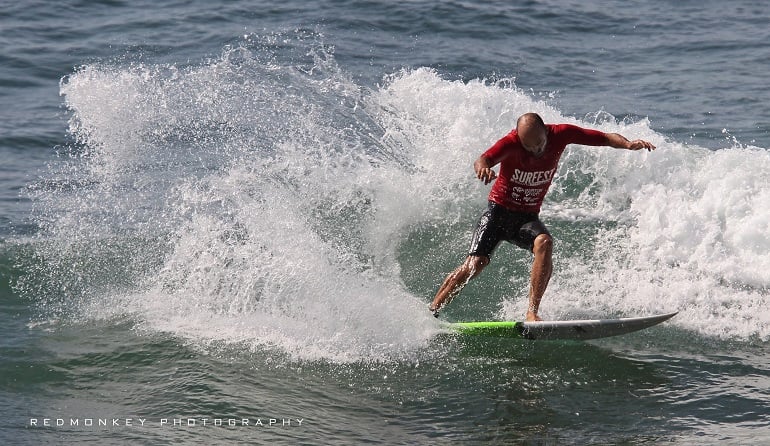 When asked if he had any remaining space for Wandiyali trophies on the mantlepiece at his Central Coast home, the affable natural-footer joked there was “always room for one more.”

He pockets a handy $2000 for his win today in small conditions at Merewether beach.
But the champ didn’t have it all his own way in the final, with one of the three judges scoring Coffs Harbour’s Otis Carey higher overall on the tally-sheet.

Molony said he knew it was close and changed his tactics with around five minutes remaining in the heat.
The tactical change paid off – Molony racked up his winning rides on his last two waves.
“I was waiting out the back of the line up hoping for a set wave and knew Otis had pulled some good scores sitting inside. It’s always a gamble picking a spot and not adapting to what’s happening, so I moved inside and it paid off,” Molony said.

The gamble sure paid off, with three judges scoring his second last wave the highest in the final – an 8, and 8.5 and an 8.2. He followed that a 5.3, and 5.7 and 5.5 with less than a minute on the clock. It was those two waves that sealed Carey’s relegation to second place.

Molony was almost apologetic to his good mate Carey when accepting the trophy.
“Oh, Otis, bad luck, I don’t know what to say,” Molony consoled.

Third in the competition was four-time winner at this event, Forster’s Joe Haddon, while his fellow Forster friend Wade Simon came in fourth. The tug-of-war between Molony and Haddon for the most Indigenous surfing crowns is set to continue at Bells Beach in May.

In the women’s event, Coledale’s Stella Crick took out the final and plans to put her prize money toward a car.
“I drove Mum’s car up here yesterday with other girls who were in the contest. I’m saving for a van so I can get around to more comps,” she said.

The 19-year-old, who normally rides a longboard, recorded her best ever result here today.

In the juniors, Joey Wallace won the final.

Wandiyali CEO Steve Kilroy told the crowd gathered for the presentations that he is guaranteeing a boost in prize money in 2015.
“The Board of Directors of Wandiyali want this contest to grow and next year we are guaranteeing 20 thousand dollars in prize money,” he said.

This will make the Wandiyali Indigenous Classic the richest contest for Indigenous surfers in the nation.