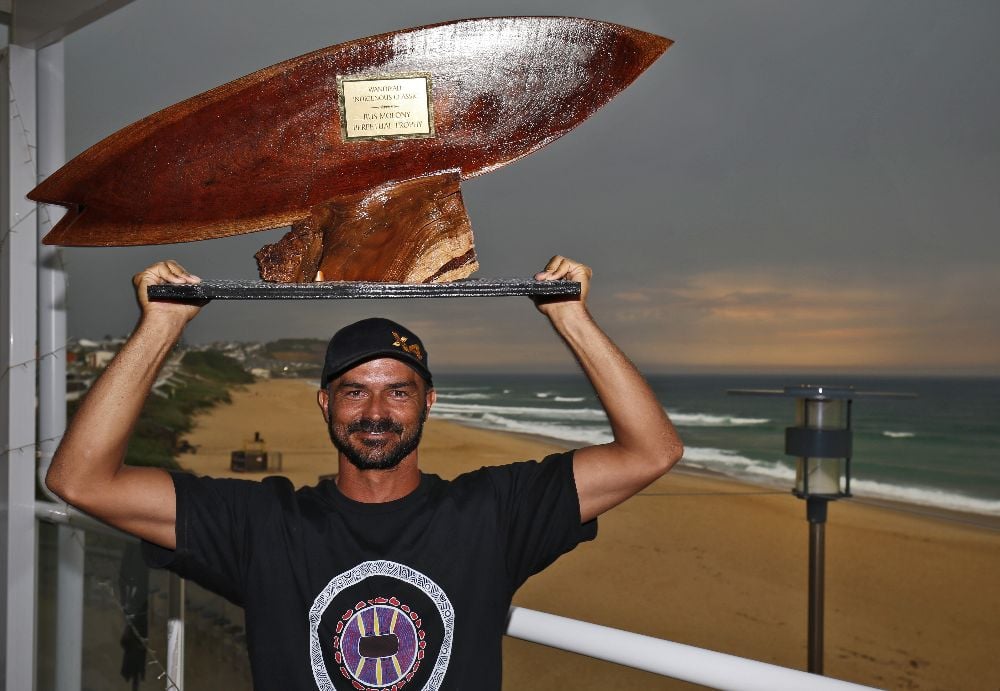 And in doing so, he became the first surfer to win the Russell Molony perpetual trophy. In 2017, Wandiyali CEO Steve Kilroy sought to honour Molony’s record run at the Indigenous event by naming the Open division trophy in his honour.

“Steve called me up a couple of weeks ago and said he was making up a trophy and wanted to put it in my name,” Molony said.

“What do you say to that? It’s a great honour to have a trophy and to have won this event 11 times. I don’t feel that old.”

The 40-year-old Molony didn’t surf like he was a day over 18 – the same age he was when he started at Surfest. Molony now has 11 Indigenous Surfest titles under his belt after claiming the 2017 top spot in today’s competition held in small conditions at Merewether beach in Newcastle.

Molony was quick to straighten out the facts when asked if this was his 11th straight victory.

“It’s not 11 straight titles. Joey Haddon has won a couple and Otis Carey as well. I started here when I was around 18 and surfed in the Koories verses cops and fireys round at Newcastle beach.” he said.

That recollection sees Molony’s involvement spanning some 22 years. He says he has an affinity with Newcastle.

“It’s like my second home up here at Newcastle. Just coming up from the Central Coast is easy for me,” he said.

Molony got two high scoring waves toward the end of the final and squeezed past Forster’s Joe Haddon.

“I love this event and love pushing my surfing. The event is put on by a great bunch of people and Wandiyali puts in so much effort in getting the whole thing happening.

“It’s awesome for Indigenous surfing. This is the biggest turnout we have had so far with around 40 in the Open division and it’s just so good to get the saltwater mob together and to catch up and share some yarns,” Molony said.

“The money comes in really handy for me. It’s not about the money – it’s about hanging out with the mob.”

Wandiyali CEO Steve Kilroy said the opportunity to sponsor Australia’s richest Indigenous surfing competition was one he was proud of.

“Wandiyali runs a whole range of social projects. Out of home care is our largest projects along with foster children and homeless, pre-schools and housing – it’s a big range of programs,” Mr Kilroy said,

“Wandiyali employs approximately 60 people to look after hundreds of people. We have 112 foster kids in our care throughout the lower Hunter,” he said. 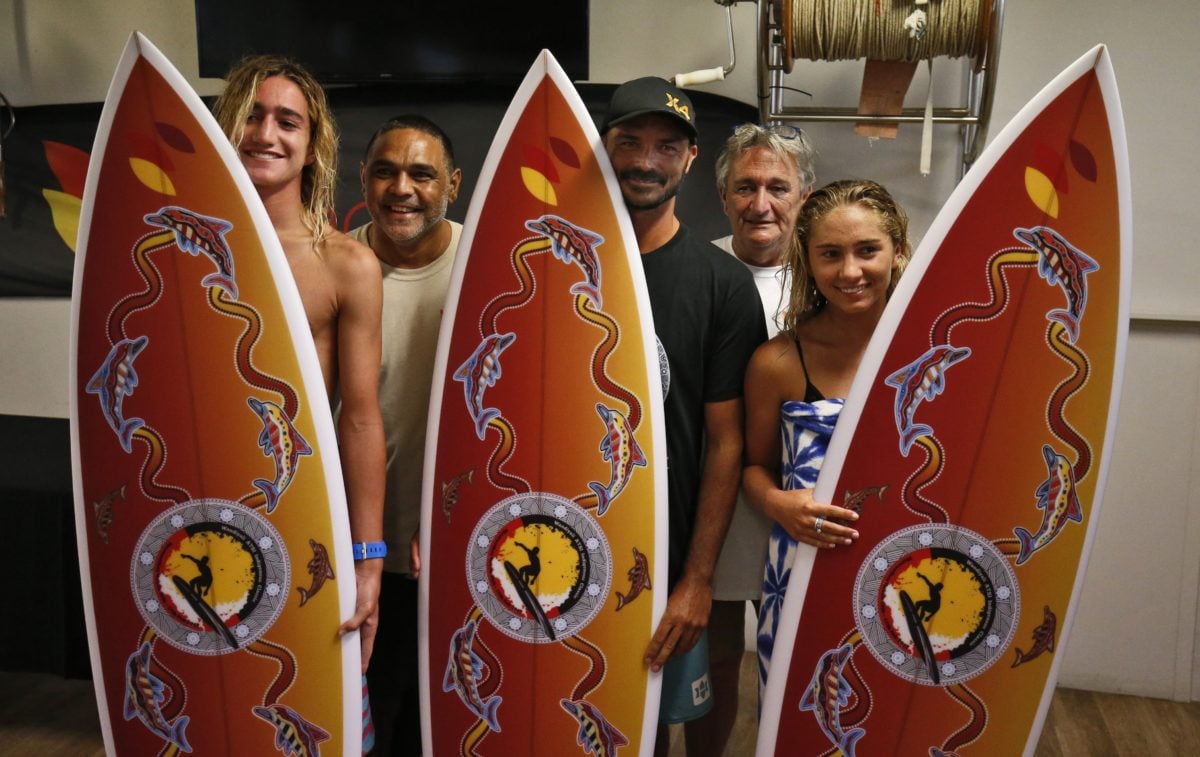 But the surfers come from around the nation to compete.

“We had a young bloke from Cape York this year. He’s travelled 13 thousand kilometres or whatever to surf here,” Mr Kilroy said,

“We’ll be back next year and are hoping to take the event to a Saturday, Sunday format and that will allow even more surfers to get involved.”

In the women’s event, Port Kembla’s Summer Simon held the trophy aloft the trophy on the dais but remained surprised she received the judge’s nod.

“It feels kind of weird. I fell on a couple of waves in the final and thought ‘that’s no good,’” the Illawarra Sports High Year 10 student said. Fifteen-year-old Summer has had a busy week in Newcastle, surfing in both the Dalton Lawyers Cadet Cup presented by Arcbuild and the Maitland and Port Stephens Toyota High School Team Challenge. And today, that competitive experience paid her a $1500 dividend that’s going straight into her bank account where she is saving for a car that will allow her to surf far and wide.

In the longboard division, former pro surfer Robbie Page had his name etched into the history books. The 50-year-old from Verges Creek near Kempsey –who has two NSW state longboard titles – said it felt terrific to get the win.

“There’s some great watermen here. At my age you’ve got nothing new to offer on shortboards but longboards keep you in the water and you can work on style,” he said. 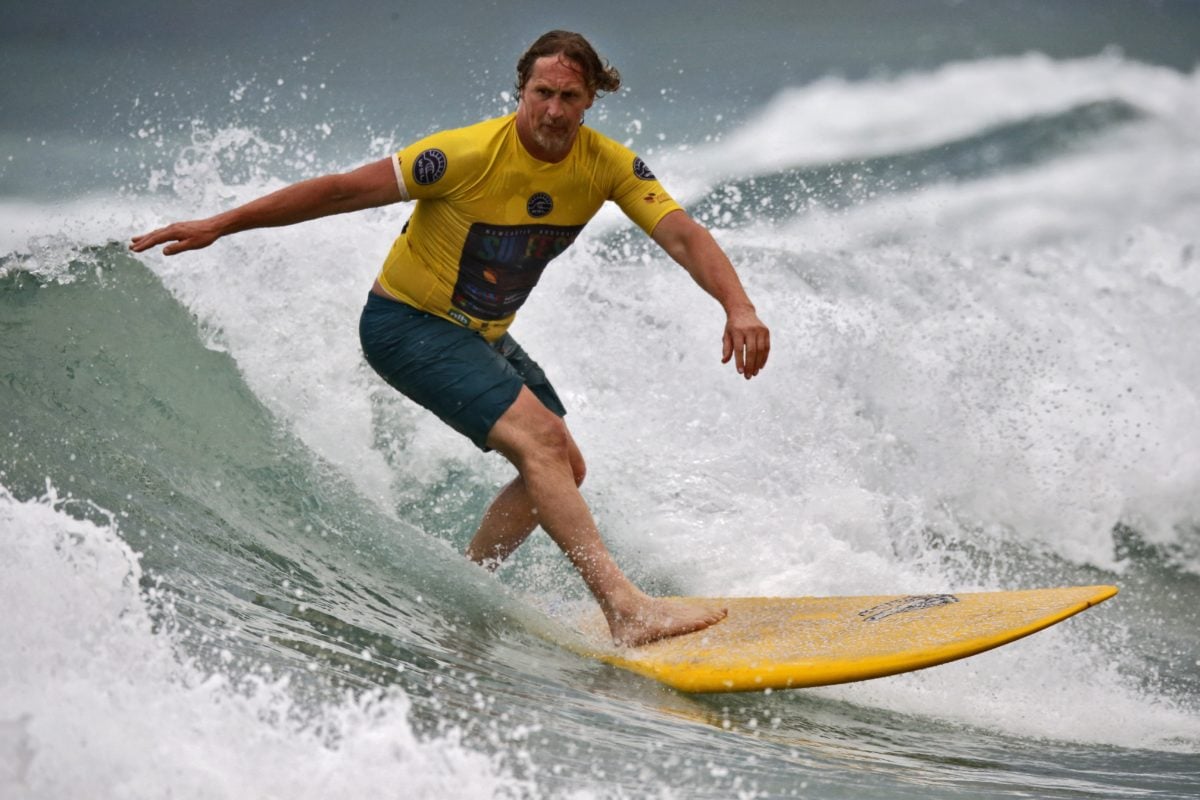 “This event gives us a feeling of belonging. There’s football and boxing but for saltwater people, there’s surfing too,” he added.

“We feel really honoured for what Surfest does for us here. I’d like to take my hat off to Surfest and all the Indigenous people here for putting something back,” Page said.

In the junior division, Avoca’s Finn Hill took $1000 prize money down the M1.

The 14-year-old, who progressed through two heats in last weekend’s Maitland and Port Stephens Pro Junior, turned the table on last year’s second placing at this event to Noah Munro from Noraville.

“I’m going to Indo this year and the money will go to that,” Finn said with a massive smile.