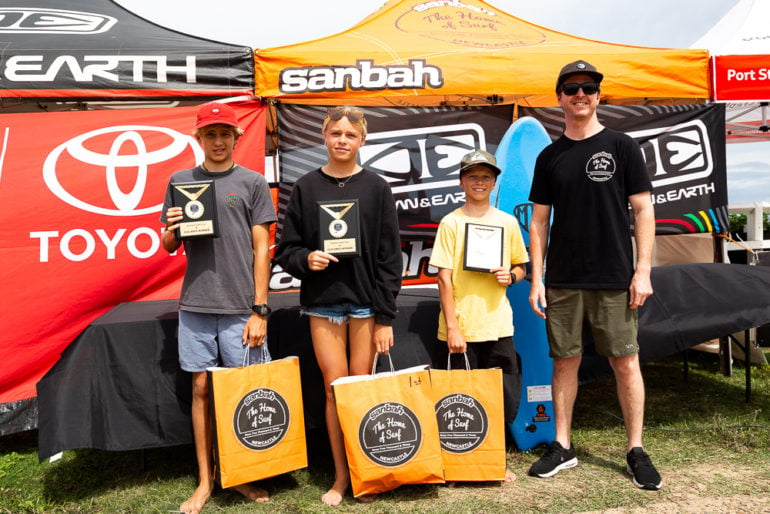 AFTER a weekend of incredible performance surfing from the nation’s best and brightest young talent at Newcastle’s South Bar Beach, a trio of youngsters – two from New South Wales and one from Queensland – have added Sanbah Cadet Cups to their already burgeoning trophy cabinets.

With a total prize pool worth over $5000, the Sanbah Cadet Cup supported by Ocean & Earth attracted almost 80 entries, with more than 50 of those entries coming from outside of Hunter local government areas.

2018 under-14 Australian title winner Hugh Vaughan won the 16-and-under division. Hugh won wildcards – held at the Port Stephens Toyota Wildcard Trials at Birubi beach last month – into both boys’ divisions at this event. The North Shelly boardriding club member and Tuggerah Lakes Secondary College Tumbi Umbi Campus student was a stand-out surfer in the water today, despite the unexpected hiccup of not progressing to the final in 14-and-under division. He’ll be in the water next week as part of the Go Kindy High School Teams Challenge slotted for Merewether beach next Thursday and Friday and again next month at the Manly Pro Junior.

Fifteen-year-old Milli Allport won the 16-and under division. Milli, who claimed the Girls 16-and-under division at the Rip Curl GromSearch National Final at Woonona last month, looks set to follow in the footsteps of her North Shelly board riding club pal Molly Picklum and make regular appearances treading the boards on surfing’s biggest presentation stages. Milli, who attends St Peters at Tuggerah on the Central Coast, will surf in the International Gromsearch in April at Bells Beach, but this week she’ll be back in Newcastle as part of the St Peters Tuggerah team battling in the Go Kindy High Schools Team Challenge.

Chez Boz from Burleigh Heads on Queensland’s Gold Coast was crowned the 14-and-under champion. The youngster, who turned 13 just two months ago, is another Rip Curl GromSearch champ, having claimed the 12-years-and-under national champion in January 2019. The year-8 student from The Southport School is also the current under-14 Queensland state title champion. Chez will next put on the competitive singlet in April, when he lines up at BL’s Bali Blast Off.

And Newcastle East surfer Sam Bisenga – who racked up a perfect 10 late on Saturday in round 2 of the 14-years-and-under competition, scooped the inaugural Westfield Kotara Encouragement Award for the local surfer achieving the best result in his division. The Westfield Kotara Encouragement Award sees Sam being refunded entry fees into five national surfing events for junior surfers in 2020.

“The winners of today’s cadet divisions show how tough the competition is at this level and sets the scene for as strong a future for Australian surfing talent that I can ever remember.

“All of these youngsters that have won their divisions here have racked up a national title in the past couple of years and it’s my guess they will win plenty more,” he said.

The next event for Surfest Newcastle Australia 2020 is the Go Kindy High School Teams Challenge slotted for next Thursday and Friday at Merewether beach.