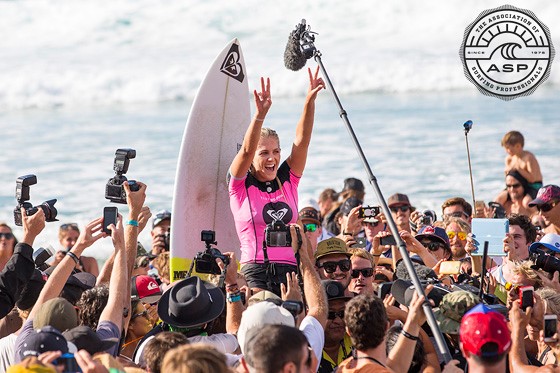 “It’s an honor to win this event,” said Medina. “This is the hardest event of the whole Tour and I feel like all the best surfers in the world, Mick (Fanning), Parko (Joel Parkinson) and Taj (Burrow), have won it. It’s been a dream to win since I was a grommet. I’ve been watching those guys on videos and reading about them in magazines. Today I had the opportunity to compete against them and I couldn’t let this chance go. It’s weird, it’s really weird, but it feels so good.”

“Second two years in a row is heartbreaking, but on the other hand it’s still a great start to the year,” Parkinson said. “I said the other day that World Titles aren’t won or lost at the first event. If I didn’t have a shocker at Bells last year I would have been right in the Title race, so hopefully I can improve on that this year. Gabriel (Medina) is a huge talent, he deserves the win and has been on fire today so congrats to him.”

Stephanie Gilmore (AUS), five-time ASP Women’s World Champion, today claimed her fifth Roxy Pro Gold Coast event title, with a sensational performance. Gilmore dispatched reigning two-time ASP Women’s World Champion Carissa Moore (HAW) in the Semifinals and went on to take down South Africa’s Bianca Buitendag in the Final. It was Buitendag’s first ASP WCT Final appearance, but it was Gilmore’s day, with the local lass peaking when it counted with her unique brand of powerful and beautiful surfing helping her post excellent scores all day.

“I haven’t felt this feeling in a while,” said Gilmore. “It’s the best feeling in the world to have all your friends and family around and hi-five everyone. I paddled up to Joel (Parkinson) before my heat to get some of his good vibes because he kept getting so many great barrels. From the beginning of the heat I had it in my head that it’s only 30 minutes and I only had to catch two good waves and just have fun. So that’s what I did. Winning the heat against Carissa was such a big confidence booster for me. It’s going to be a long hard year but I’ll do as much as I can to try and win the Title.”

“I’m so overwhelmed by this experience. It’s a first time for me and I didn’t quite know what to expect,” said Buitendag. “It’s a bit like a dream for me. I’m giving my prize money to charity. We are so lucky and we have so much already. It goes along way.”

Mick Fanning (AUS), reigning three-time ASP World Champion was eliminated in the Quarterfinals by Gabriel Medina (BRA) in an exciting goofy verse regular match-up. Fanning took an early lead and looked as though he was destined for the Semifinals, but Medina had other plans, stealing the momentum of the heat and a Semifinal match-up against Taj Burrow (AUS) with an excellent 9.40 (out of a possible 10).

“I knew the wave he got was going to be a good one and I was out of position so I just had to sit and wait to see what he scored,” Fanning said. “All credit to him (Gabriel Medina) even if you get a great wave, you still have to surf it to get big scores. It’s a lot harder out in the water than it looks from the sand. That’s the way it was and I just have to look at what I did wrong and learn and move on.”

Reigning ASP Women’s World Champion, Carissa Moore (HAW) was eliminated in the first Semifinal of Roxy Pro Gold Coast by event Champion, Stephanie Gilmore. The highly anticipated heat was a clash of the titans, with a collective seven ASP Women’s World Titles in the water. The local hero eliminated Moore who, up until today, was the form surfer of the event. Moore leaves the event with an equal third place finish.

“I’m going to have to go away and look at what went wrong,” Moore said. “I’ve had such a great event and I was feeling really good but it just didn’t go my way today. I’m going home disappointed, but I lost in the Semifinals last year and still won the ASP World Title so I’m positive about the year ahead.”

Kelly Slater (USA), 11-time ASP World Champion and last year’s Quiksilver Pro Gold Coast champion was eliminated in the Quarterfinals by Adriano De Souza (BRA). Before today’s clash the pair had met 16 times in ASP WCT history, with Slater holding the advantage with 11 wins. Despite being behind on wins, De Souza’s effort today makes it five wins in a row against Slater who exited the event with an equal fifth place finish.

“It was frustrating because I fell on a couple of waves,” Slater said. “Adriano (De Souza) was on the better end of being in sync with the sets, it seemed like the better waves always came when he had priority. I probably could have been more patient. You don’t know out there because you catch a wave and hope it builds down the line. I never really felt on today, I was pretty tired after that heat. A bit of a lapse in concentration for me.”