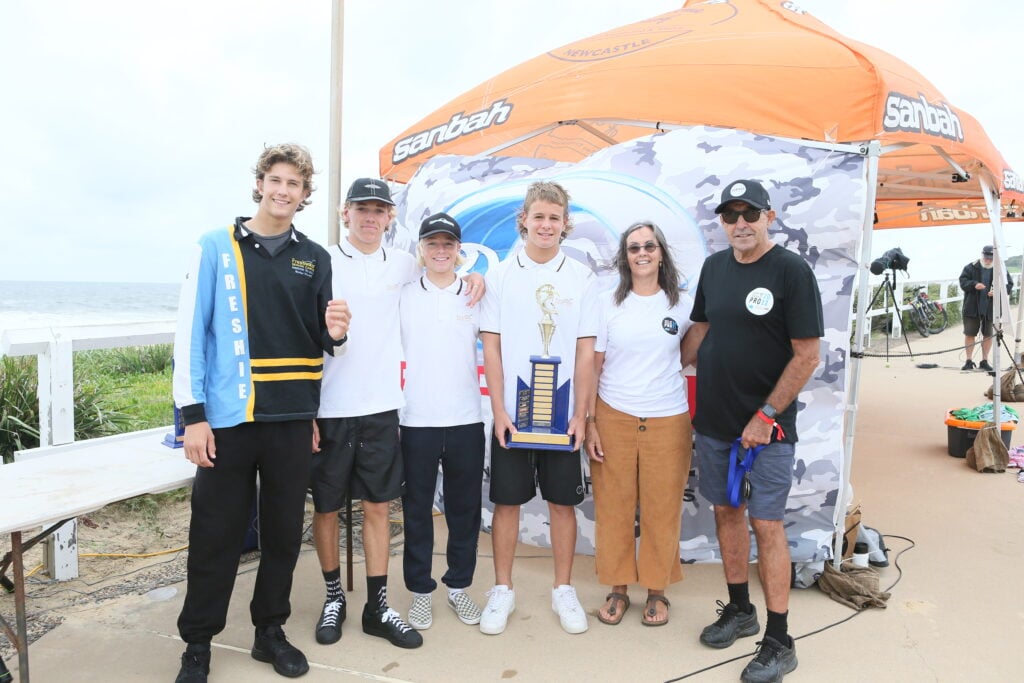 The unique event saw each team nominate a maximum of five surfers with three surfers nominated per heat. Each competitor could catch a maximum of three waves, with the highest score of those three waves counting toward the team score. After three waves, the surfer was required to leave the water and tag the next team member on the beach. With bonus points on offer for finishing a heat quicker than the 20 minutes allowed, teams had to combine skill, athleticism, and good judgement to work their way up the tally sheet.

The team in the final from Freshwater – Xavier Bryce, Kalan Orchard and Winter Vincent– racked up an impressive 62 points to account for runners-up. Tuggerah Lakes Secondary College Tumbi Umbi Campus boys who still managed to rack up 42 points which was the day’s third highest heat score.

Xavier Bryce’s first ride racked up an 8.5 in wind-affected conditions to set up Freshwater’s victory. And Xavier is no stranger to the winner’s podium at this event. In 2020 he was part of the winning team from North Narrabeen Sports High.

The girls from Tumbi Umbi – Amelie Lowrie, Milli Allport and Halle Hunt – scored 41.4 in the final. Their nearest rival was St Mary’s from Gateshead who scored 23.4.

Inclement weather forced Surfest organisers to reduce the 2022 event from a planned two-day event to just one day.

Surfest organiser Warren Smith said while it was disappointing not to have all the schools who had registered for the Challenge able to participate because of the weather, interest in the event increases every year. And so does the quality and standard of surfing.

“We’re seeing some of the NSW’s professional surfing prospects undertaking a very individual sport as a team member, and the enthusiasm from these young athletes makes for a great day.

“And a big shout out to the teachers too. They’ve put in a huge day and been very supportive of the students and the event,” Mr Smith said.