By popular demand there will be a second encore of the ASMF Show at Lizottes Newcastle – only 50 tickets left!

The AMAYSIM AUSTRALIAN SURF MOVIE FESTIVAL presented by GOPRO is an event that screens independently produced surf movies. Director Tim Bonython’s independent surf movie tour initiative is back this year, touring again in January – February 2014. In it’s 11th year the festival is touring Australia with up to 30 stops around the Australian coastline. Each venue provides a unique surf movie experience incorporating local businesses, surfers and music.amaysim australian surf movie festival presneted by gopro This years screenings include 2 x50min movies, give aways from our sponsors in the intermission, and live music by acoustic performer Jack Dawson. Attend the ASMF for your chance to win a return ticket for 2 to Tahiti, GoPro Hero 3+ Black Edition cameras, House of Marley headphones and much more!

Call Lizottes on 0249562066 to make a booking or visit http://www.newcastle.lizottes.com.au/live/ 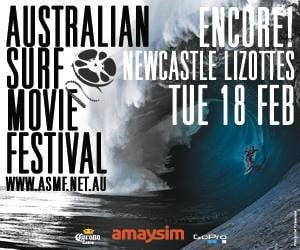