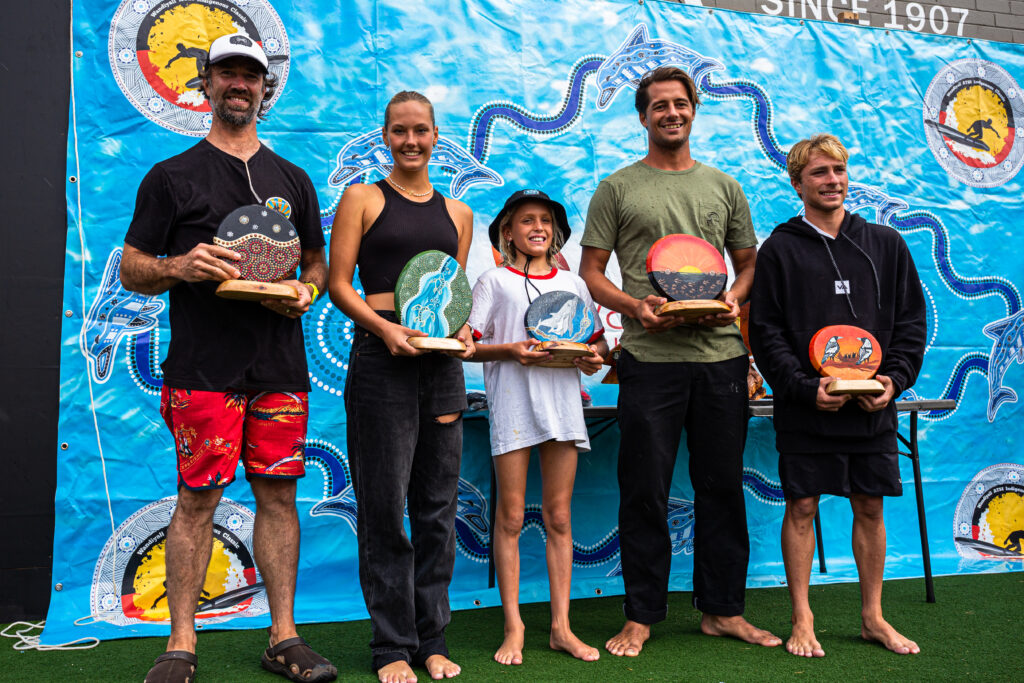 Rhys Collins won his third consecutive title in the longboard division, while Taj Simon from the Gold Coast won the boys and Broken Head’s Leihani Zoric won the girls.

“I’ve surfed in Surfest for heaps of years but never the Indigenous Classic. Normally I have my hands so full with preparing for QS events to try and qualify for the World Tour, but this year I’ve taken the year off competing on the QS tour so I had time to do this, enjoy culture and hang out with my mob,” 26-year-old Bailey said.

The former National Indigenous Mens Champion said he wasn’t planning to surf in this week’s City of Newcastle Pro QS 5000, but that’s changed after today’s win.

“I wasn’t going to surf in the QS here, but I’ve just earnt myself a spot with this result which is really awesome. I can’t turn that down,” he said.

“It got tricky out there today, but there was some fun to be had.  I got a few surfs in what might be the QS comp bank before the AAP Consulting Womens Pro later this week.

“I love Newcastle so it’s great to be back. It’s really nice to be here at the Wandiyali and get the result,” said McCorquodale, who is also the reigning National Indigenous Open Women’s Champion.

“Surfing in the QS 5000 this week is going to boost my QS rating. Getting the experience against some tough competition is what I am looking for right now,” she said.

Rhys Collins, who grew up in Tuncurry and now lives in Flinders in Victoria, flew up to Newcastle for the Wandiyali, where he was cheered on by his family in the longboard contest.

“This event is great because all the crew know each other pretty well. I seem to do alright here,” laughed the 45-year-old, who undertakes work with Traditional Owners on behalf of Melbourne Water.

In the junior division, 18-year-old Taj Simon from Wollongong – now living at Rainbow Bay on the Gold Coast – took out the event.

“I finished school last year and moved to the Gold Coast to surf and train and concentrate on my surfing during this gap year,” said the 2020 Newcastle Rip Curl Gromsearch U/16 winner.

“I am aiming to make the Tour but this year I am concentrating on Pro Juniors and next year I’ll be doing the QS events,” the former National Indigenous Junior champion said.

Surfing is a family affair for the Simons. Taj’s father Mark placed fourth in the longboard final and his sister Summer placing third in both the womens and the girls finals.

The girls event was won by nine-year-old pocket rocket Leihani Zoric. Zoric battled with McCorquodale in both the juniors and open womens, with each placing second in the event won by the other. In keeping with the family vibe at the Wandiyali, Leihani’s mother Kirsty came fourth in the womens final.

“She always beats me,” Kirsty said, referring to her daughter.

“I love this comp. I’s the best ever. I’m from the Yued mob in Western Australian and I just love sharing my culture with everyone,” Leihani said.

“I can’t wait for next year to come back, it’s the best weekend,” she added.